Back on the Water
“Finally, back on the water” was the comment you got from most sailors on the docks of a sunny Marstrand during the restart of the M32 European season. Marstrand showed it’s best for the teams competing. “Just fantastic to be back out on the water..” says Ian Williams of GAC Pindar and Hakan Svensson of Cape Crow Vikings agrees and comments “Finally! It’s very nice to be back.” 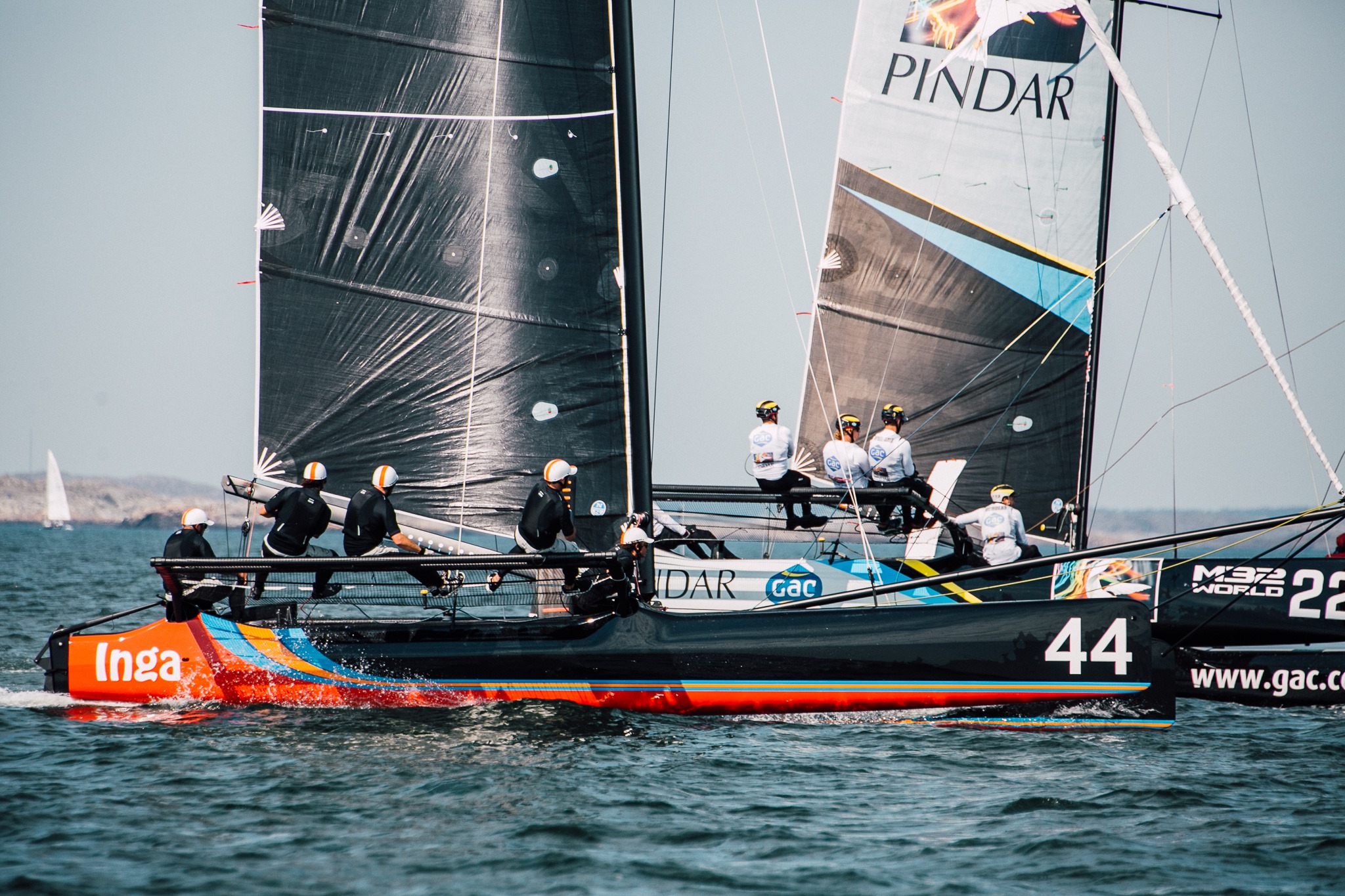 The racing was held in mostly light winds with a seabreeze that didn’t quite pick up that it usually does on the Swedish west coast. Early on in the regatta it became apparent that GAC Pindar and Inga from Sweden were fighting for the win. Although GAC Pindar walked away with most wins it was a well fought battle with Inga from Sweden not giving anything away. Richard Göranson comments “Everytime we were in the lead we got tricked out of it somehow..” “..we have narrowed the gap a lot so eventually we will get him”

Fighting for third was Peter Warrer from Aarhus Denmark. Not new to the class but new as skipper on the European circuit Peter comments “We are learning a lot..” “..the M32 is definitely the boat to sail right now”

The regatta was held with some special measures due the pandemic restrictions. “We have had a good cooperation with the Swedish Federation and local sailing clubs to follow all the guidelines to host an event that is safe both for our participants and the community at large. A few things have been different but we already have a pretty digital setup with many things being done on-line” says Class Manager Mattias Dahlstrom.

Newport fleet gets ready for Midtown Cup 2
After a successful July event  the Newport fleet is getting ready for the second event of the Midtown Cup. The first event saw Newport from it’s best side with sunshine and a breeze reaching the high teens on the final day. The last event was won by Midtown Racing helmed by Larry Phillips all decided in a nail biting last race where they came out ahead of team Argo with skipper Jason Carroll. No doubt team Argo is more than ready to get back at it and claim the title. 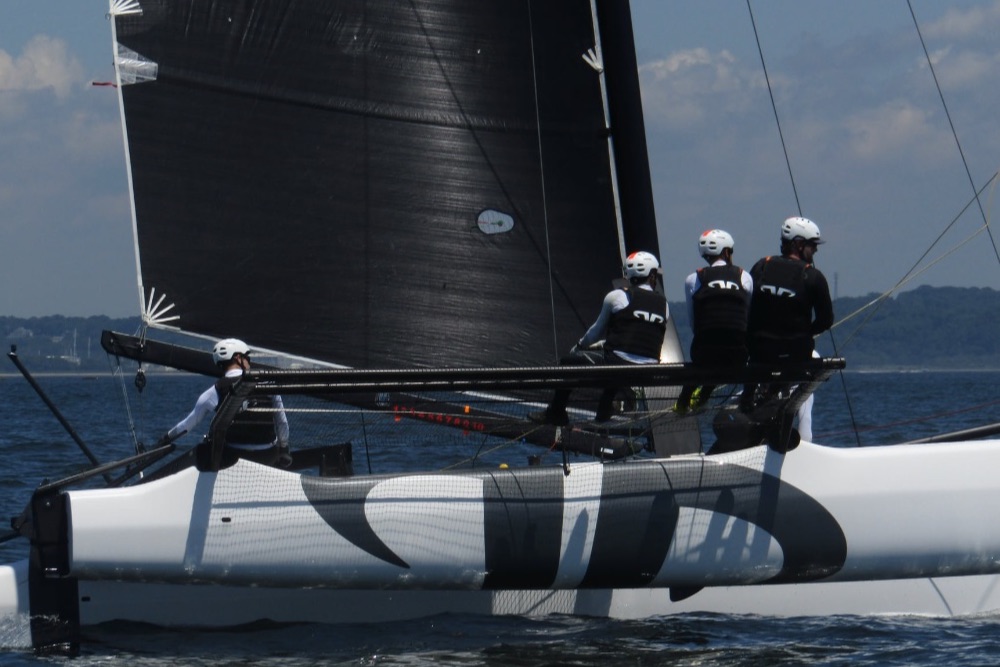 Racing starts this weekend and it’s the second event of Midtown Cup which is a regatta  series of 4 with events in September and October. 8 teams are expected on the race course. 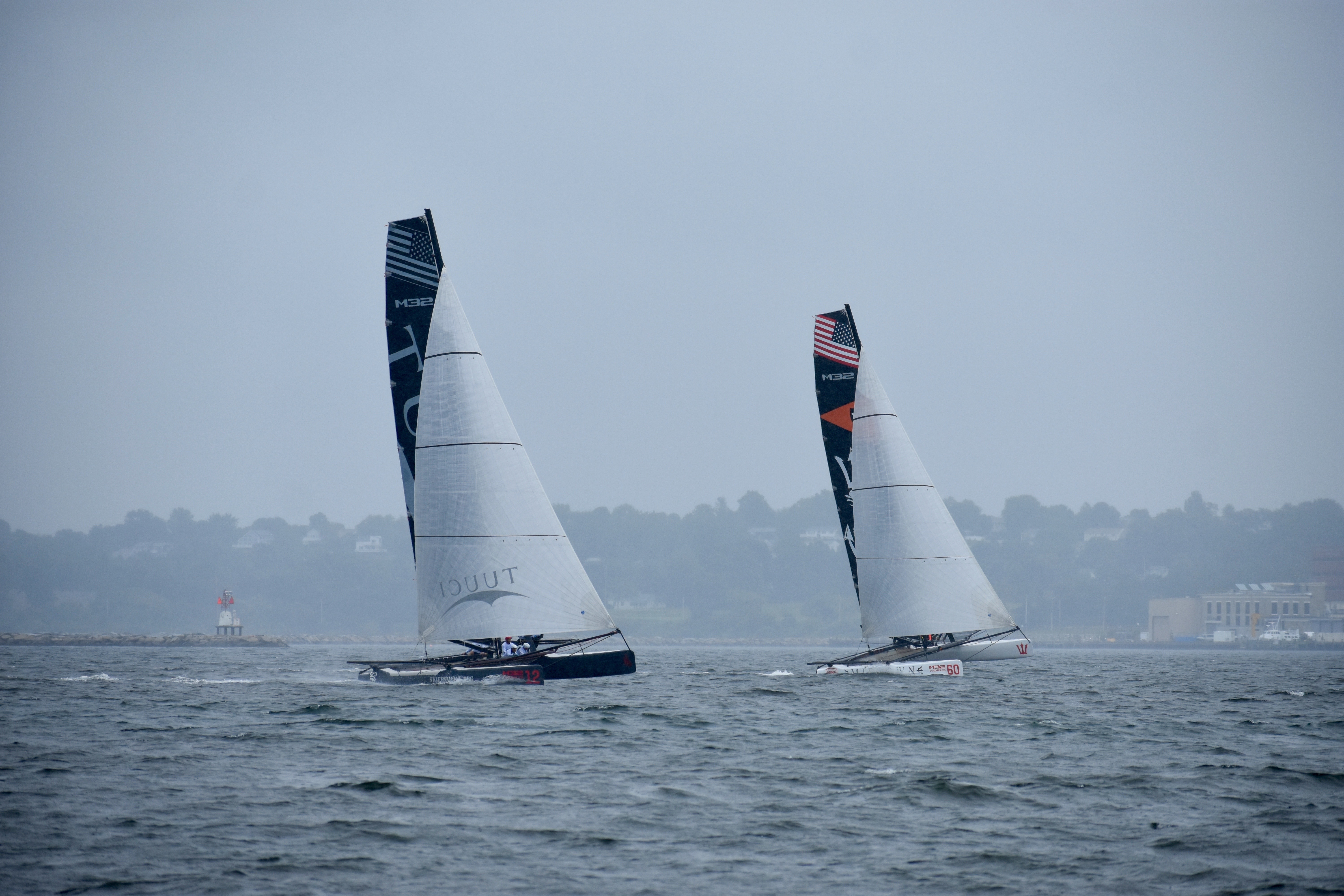 M32 Distance Racing: Surf Club Classic
Sunday, August 16th marked the first annual Surf Club Classic regatta held at the Midtown Racing Center in Newport, Rhode Island.
Despite the current situation in the sailing world due to COVID-19, the local group of M32’s in Newport, Rhode Island have been fortunate enough to be one of the few fleets able to consistently sail this summer due to the formatting of the regattas, collectively organized by the fleet. This desire to race has lead to the latest multihull, thirty two mile, double Island race supported by the Surf Club restaurant, and promoted by Dave Doucett and Jeremy Wilmot, who were instrumental in coming up with this new race, which will now be held annually.
Following the start south of Rose Island, the boats sailed clockwise around Jamestown and Prudence Island in a heavy northerly breeze with all boat choosing the full main. The course included three timing gates throughout the race to record individual segment winners. This format allowed for multiple winners at the end of the day, keeping the competition alive throughout the racing. Along with the timed legs, there was a competition for top speed reached at any point during the race, as well as an overall race winner.
Results are as follows:
Leg 1 Winner: Yonder Racing
Leg 2 Winner: Skiff Sailing/ Gorilla Rigging
Leg 3 Winner: Midtown
Top Speed: Midtown- 29.7kts
Overall results: Yonder Racing
Skiff Sailing/ Gorilla Rigging Midtown
Rule #1
Overall time: 2hrs 12mins 8 seconds
The success of the event was attributed to the spontaneity and cooperation of all who are involved in the local M32 fleet. There isn’t anything easy about scheduling an event like this in times like these, especially one planned the week beforehand. Nevertheless, the first annual Surf Club Classic was a success and we look forward to this becoming a perpetual event. 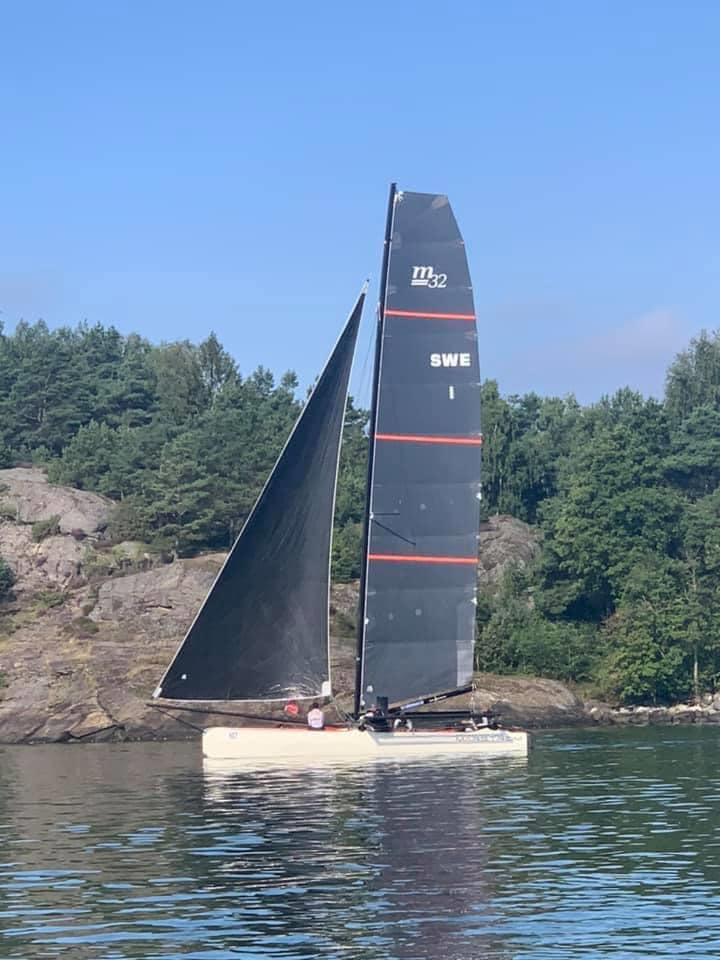 M32 Distance Racing: Tjorn Runt
The Tjorn Runt, the race around the island of Tjorn is with it’s around 30 Nm the premier distance race on the Swedish west coast. The covid situation had an impact on this years edition but the number of participants were still in the hundreds. The race this year became a light wind affair and line honors went to an M32 sailed by the designers themselves; Göran Marstrand and Kare Ljung. Göran has his own boat in Sweden and take part in a number of different distance races along the Swedish coast. First keel boat to cross the line about 30 minutes later was 57ft Progressiva with skipper Johnie Berntsson also known in M32 circuits racing his own boat on the Scandinavian Series a few years back.

Although this year was sailed in light winds the race record is held by an M32 which in 2018 sailed the course in 2h 5m 24s helmed by Hakan Svensson, the man behind Aston Harald Composite, builder and license holder of the M32. The record was then 11 years old and held by 60 foot trimaran HiQ with skipper Klabbe Nylöf who also has a past in the M32 Scandinavian Series.

This is the way most of our class members got introduced to the boat. The most common answer to the question ”Why did you start racing the M32?” has always been, “I tried it, and then I was hooked.” The demo boat will be available on most regattas to give you a chance to join the fun.
m32world.com/demoboat/
m32world.com/sales/