Bliksem Victory at Picture Perfect Europeans
Lake Garda gave the M32 fleet its usual fantastic conditions for the European Championship. The scheduled 15 races were all sailed in the southerly Ora and sunshine. Walking away with the trophy was team Bliksem with skipper Pieter Taselaar after a stellar performance with five bullets in the last ten races. “I’ve never won a European Championship; it’s the first. Extremely happy with it. We just had a fantastic day. The starts were good, the execution was good, and sailing in a place like this, it doesn’t get any better,” comments Pieter.
Team Bliksem flies the Dutch flag. However, they are based in the USA, where they are a regular and successful participant of the Miami and Newport series,  winning the US Nationals last October. 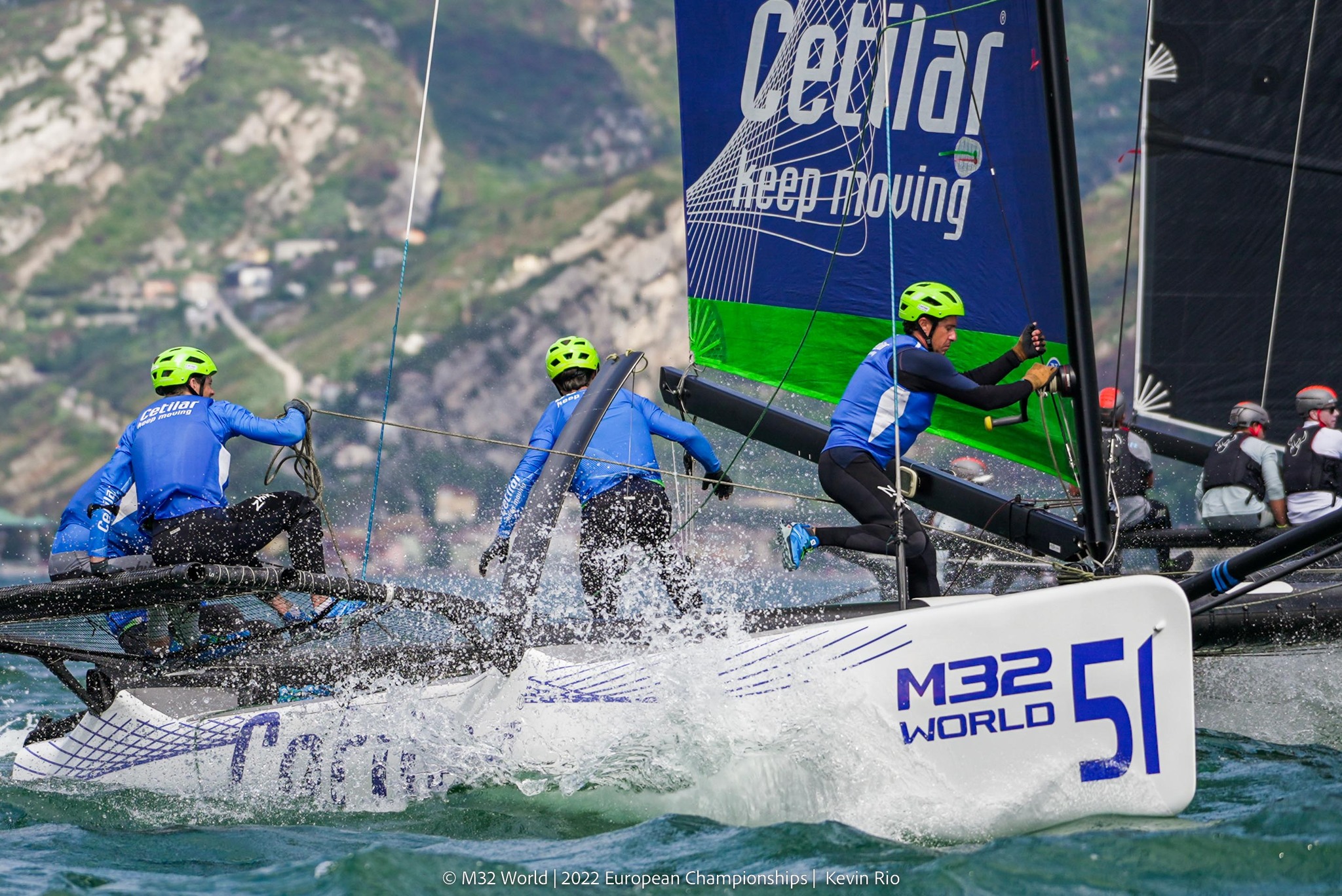 Andrea LaCorte and his team Vitamina Veloce got the silver medals after a nail-biter last race with a one-point difference to third. The Italian team is one of the class veterans on the European series, and this season had a two-boat program with Vitamina Rapida helmed by Marco Radman. We are very happy with the medal, “I didn’t expect that in this solid fleet… I’m more than happy about it,” Andrea comments. The regatta in Riva was also the last event of the European Series. Andrea’s team took the win for the second year in a row. However, this time with a considerably higher level of competition and more participants. 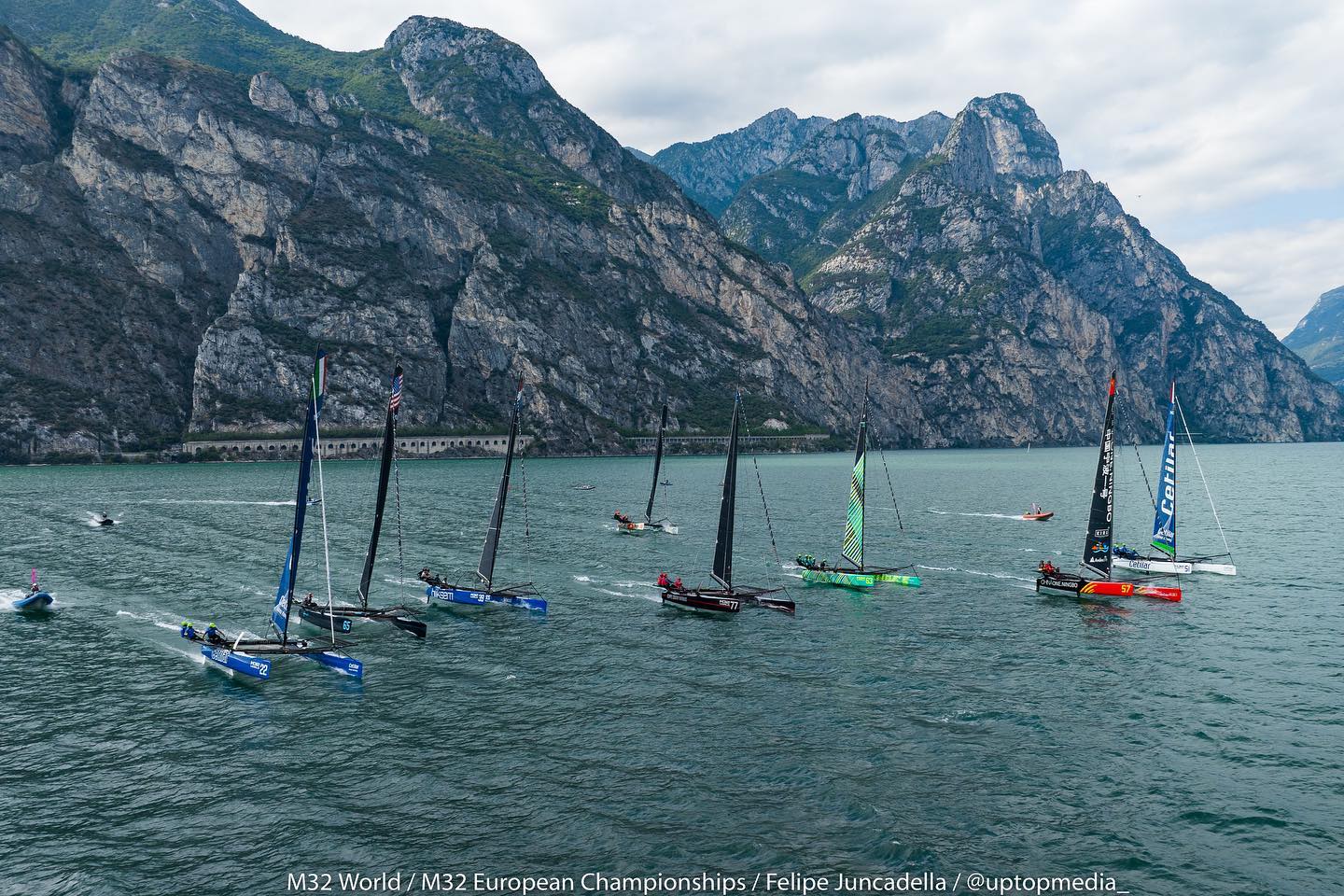 New M32 team China One Ningbo with skipper Pieter-Jan Postma has had a steep learning curve since joining the series and to be on the podium in the highly competitive fleet is nothing but a success story. “Bronze medal is a big climb from the last event. You are in a battle with the best teams, and that is just a big honor,” says PJ.
Full Results: m32world.com/results/ 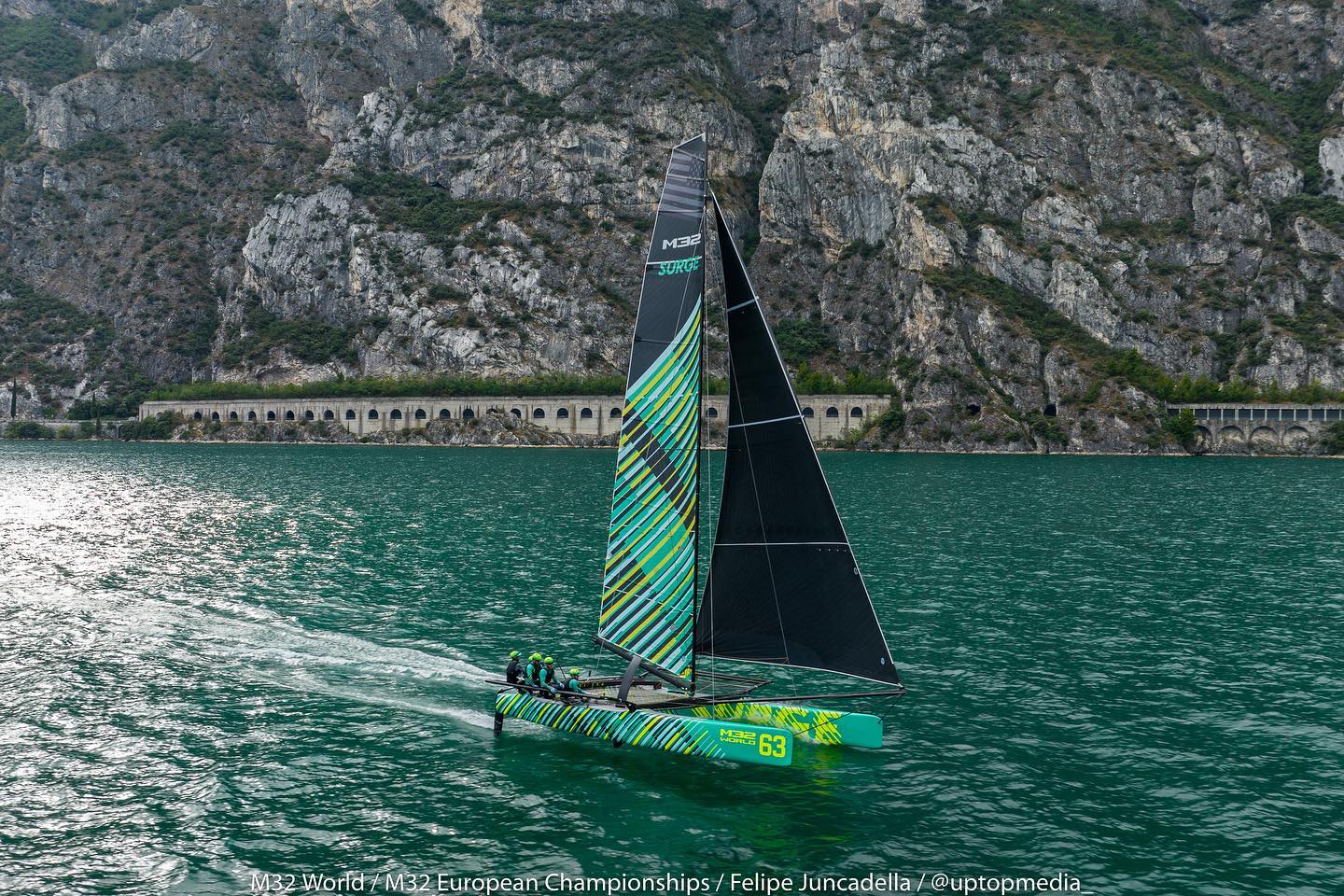 “You have a cappuccino, and it’s nice and calm on the lake. By the time you are pulling on a wetsuit, it’s building, and when you get out there, it’s ripping,” says Ryan McKillen, skipper of team Surge from Miami. Several American teams have made the trip across the pond throughout the European season and joined the European fleet. On Lake Garda, team Surge and team Pursuit with Bill Ruh joined the fleet, both doing their first event on the Italian lake. Bill Comments, “I’ve never been to Lake Garda before, and now I understand why it’s the Mecca of sailing” and continues, “The wind is fantastic, the setting is amazing, it’s really a joy to be here, and the team is having a great time”

Picture Perfect
The M32 media team, this time photographers and drone operators Kevin Rio and Felipe Juncadella, did a fantastic job capturing the M32 fleet with the jaw-dropping backdrop that Garda provides. Enjoy the gallery at:
Facebook Gallery

See you in Cascais
Next up is the final and most important event of the year, The World Championship in Cascais, Portugal, in October. Seven American teams will join the European fleet, and there is high anticipation of some fantastic racing. Reigning Champions Convexity with skipper Don Wilson and tactician Taylor Canfield will defend their title. Last year’s world’s runner-up Inga from Sweden with Richard Goransson and tactician Chris Draper will go for the win. After winning the Newport Midtown Cup Extreme2 with Dan Cheresh will be hot contenders. Hot after a successful silver at the European Vitamina with Andrea LaCorte, tactician Adam Minoprio may throw their hat in the ring. As Ryan McKillen says it after the Europeans, “The European fleet is good. There are no cupcakes out there.” 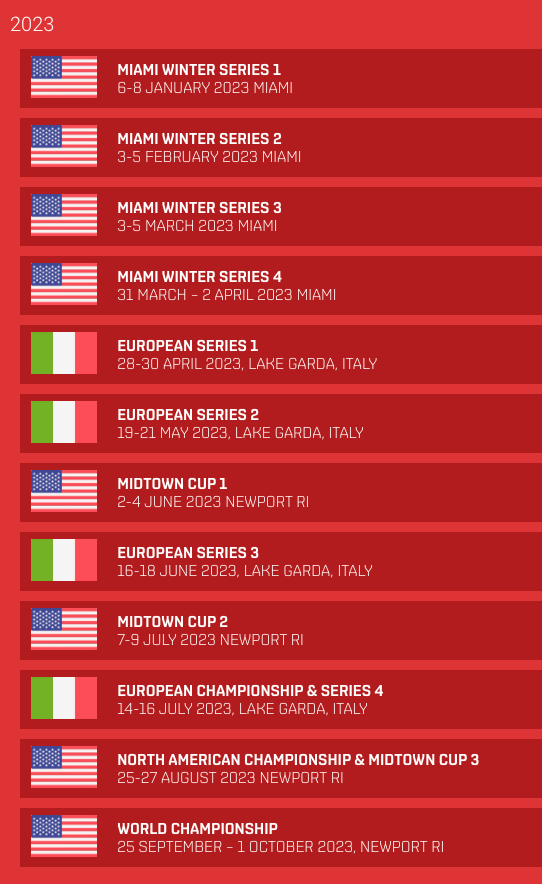 For the 2023 season, the class will have regattas in three different locations. The classic and loved sailing venues Miami, Lake Garda, and Newport, RI, will host the winter and summer series and all Championships. Save the dates now.
Full Schedule: m32world.com/calendar/

The perfect introduction –  M32 Demo Boat
The M32 Demo Boat is the perfect way to get introduced to M32 racing in a way that is tailored to your background in racing and other classes. For example, maybe you have your own racing team and just need a few hints on M32 specifics; or maybe you need help with setting up an M32 experienced crew and start from the beginning with multihull racing.
New Owner Pathway: m32world.com/m32-academy/