The M32 fleet learns quickly as the second day of racing at the European Series in Pisa, Italy demonstrated.

As if sending a message to the leaders that the pack was ready to take the fight to GAC Pindar and Spindrift racing after their runaway performances on the opening day, the mid-fleet became the agitators today, stirring things up at the front.

After yesterday’s racing, the focus for many teams had been on improving starts and manoeuvres. From the first race of the day it was clear that many had discussed their strategies overnight and put them into practice.

One aspect that the fleet had focussed on was the benefit of starting at the pin end of the line and sailing a tighter, faster angle in the 300m sprint to the first mark. But what some hadn’t taken into account was what to do when the bulk of the pack had the same plan and wanted the same piece of water.

Seconds before the gun went, a close-quarters scrap was on the cards and a scrap was delivered as the fleet sprinted towards the first mark.

But Spindrift racing had also been considering their starts overnight and had come out with a different plan, namely to perfect their time on distance run into the middle of the line at full speed.

Meanwhile, behind them a battle was raging as the fleet slid down to the first leeward gate. Richard Göransson’s Inga from Sweden was in second, the Danish Youth Vikings, led by Daniel Bjørnholt, were in third and local sailor Andrea Lacorte steering Vitamina Veloce was in fourth with Håkan Svensson’s Cape Crow Vikings fifth. Overnight leaders GAC Pindar were forced back to sixth position.

Throughout that race the battle between Bjørnholt and Göransson continued on each leg and was only resolved at the final mark when the Danish Vikings tripped up and were dealt a penalty with just metres to go to the finish. They were gutted.

“The umpire thought that we took a bit too much room around the mark in a rounding with Ingar and so we had to do a penalty and that cost us about four of five boats,” said Bjørnholt. “The starts across the fleet were a lot better today and there were a lot more battles to deal with.”

Göransson’s team was also improving: “This type of racing is new to me so I’m learning a lot, including some new rules,” he said. “The situation with the Danish boat was a scenario that we had discussed beforehand so it was good to use this to our advantage when it happened.”

The second race of the day delivered a one/two for the favourites with Spindrift racing taking the upper hand once again and forcing GAC Pindar to be the bridesmaids. But the close action was again in the mid-fleet where there were plenty of lead changes in the quick-fire six leg, 20 minute race. 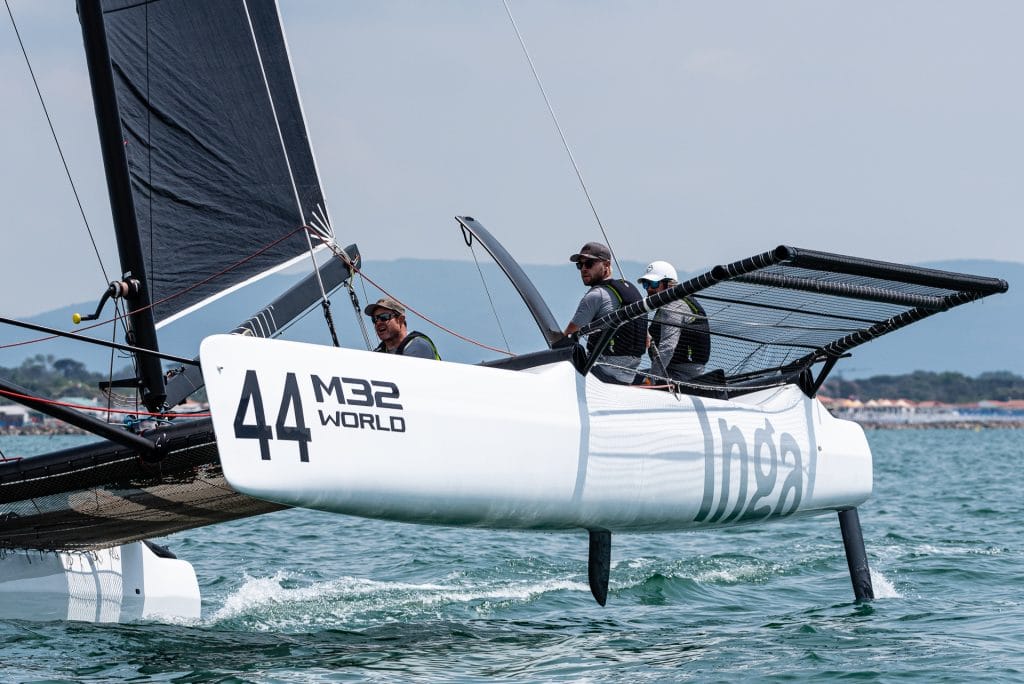 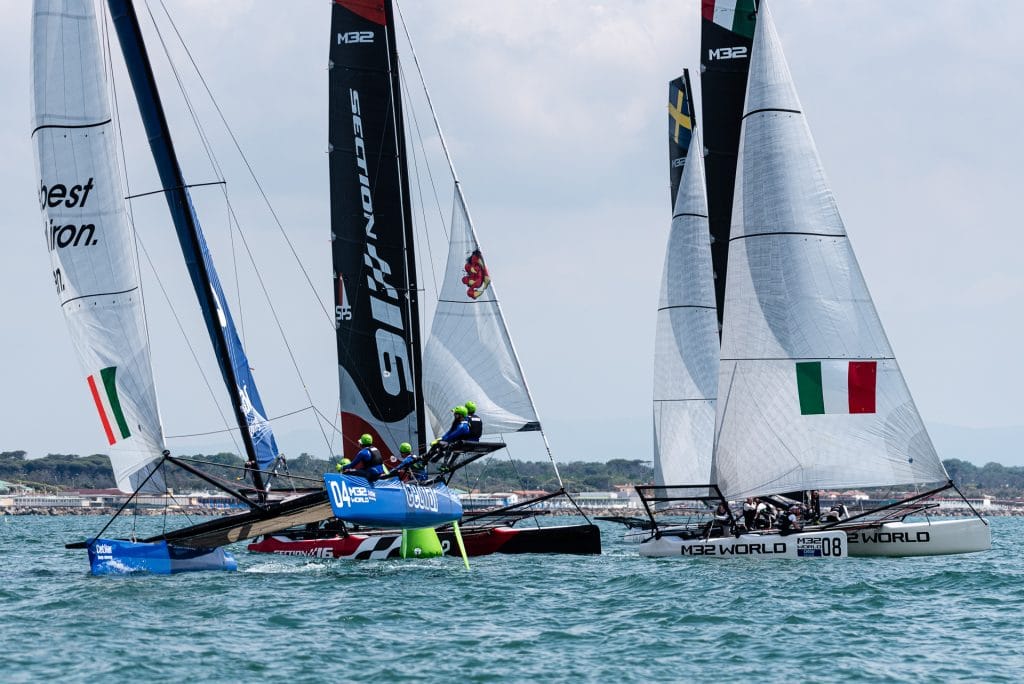 The third race delivered even more intensity. Any form guide that had been drawn up so far was starting to look dodgy with a thorough re-shuffling of the mid-field. Svensson had spent much of the race in second, while Marco Radman’s Centro Vela Sunset team had launched themselves from the back of the pack to third for most of the race, to finish in fourth.

“This is the first time I have sailed on an M32 and typically we sail F18 cats, but these boats are much bigger and faster and a new level for us,” said Radman. “But step by step we are getting better and if we get a good start we are beginning to stay in the middle of the fleet. But the most difficult things to get right are the manoeuvres.”

Others like Richard Davies’ Section 16 team were having a more erratic time as they visited both ends of the fleet: “It was definitely a day of snakes and ladders for us today,” he said. “We felt we felt like we had a two thirds down and one third up day today, plus we’re still struggling with our starting which we have to sort out, but we did have good boat speed so we feel good about that.”

The message was clear, the fleet was catching on quickly and the pack was closing up. And while few could hold back the two top dogs for the entire 20mins, GAC Pindar and Spindrift racing were now having to fight even harder with each race.

But as the afternoon wore on, the weather started to change as the developing light sea breeze fought against the southwesterly gradient. The result was a steady decline in wind strength.

By race five there were no hulls flying and no way of getting the crews any further forward in their effort to lift their boats’ transoms. As the breeze dropped to just four knots and at times below, Spindrift racing took the last win in a race that had seen multiple place changes across the entire fleet.

Although they had been put under pressure throughout the day, the two front runners had sail consistently and recovered from difficult places to stretch their overall leads.

But there was no mistaking how much closer the mid fleet battle had become and how the tightest scrap tomorrow will be for the third podium position.

Just four points separate third to fifth with just 15 points through to seventh. With six more races scheduled for the final day’s racing and no discards, you don’t have to slip up much to fall a long way.

That bit at least, doesn’t need to be learned by anybody here.