It only takes a couple of knots of extra breeze to transform M32 racing as these lightweight, potent catamarans respond immediately to the slightest increase in pressure.

Until today, conditions at the Cetilar M32 European Series Pisa have typically been sub-six knots, conditions that would be below the racing threshold for many other classes. But for the M32 fleet there was still meaningful, tactical racing right down the wind range where the key ingredients for success have been keeping boat speed up at all costs and minimising manoeuvres.

But today, the strategy was different, for the first race at least. This one was all about speed.

Just six to nine knots of gradient breeze from the north was all it took to provide a completely different look and feel to the racing as the fleet performed a slingshot reaching start, followed by a headlong charge to the first mark – hulls flying and umpire chase boats working hard to keep pace. Everyone’s foot was to the floor.

It had been no surprise to see Ian Williams’ GAC Pindar opt for the pin end of the start line, while Xavier Revill helming Spindrift racing had set up for what has become his trademark time on distance charge at the line this weekend. Both had been doing this throughout the event and both had had their share of success with these tactics.

This time it was Williams’ strategy that won out, allowing GAC Pindar to round the reaching mark ahead and lead the charge down to the bottom gate.

But for Spindrift racing the plan hadn’t worked and for once they were late. “We had a poor start at the committee boat end and were so close to another boat that we couldn’t build speed and we were then just caught up in traffic,” said Revill on a race that saw them locked in fourth until the finish.

This in itself was another clue to the different conditions and the change in gear across the whole fleet. With more boat speed to hand, manoeuvres were slicker and a new, faster style of racing was coming into play.

For those that were new to the class there were new modes to learn, while those with broader experience changed gear with ease.

Among the latter group was Richard Davies aboard Section 16. Throughout the previous two days his team’s boat speed had been good, but he had been conscious of the need to improve his starts. As he chased GAC Pindar around the track to finish second after an impressive start, it was clear that another piece of the performance jigsaw had been put into place.

Another team to demonstrate big improvements over the weekend was the Danish Youth Vikings who, despite this being their first official M32 European Series event, had caught on quickly and finished this race in third.

But while the weather had kicked off the day in another gear, things were clearly about to change as the middle of a weak low pressure system worked its way up towards the race area, darkening the skies and dropping the breeze.

Indeed, towards the end of the first race the decreasing breeze meant that crews were back in the transition zone upwind and were facing a dilemma as to when it was quicker to use the gennaker. Anticipating this and responding to it quickly, sometimes on several occasions on one leg, brought another tactical element into play. 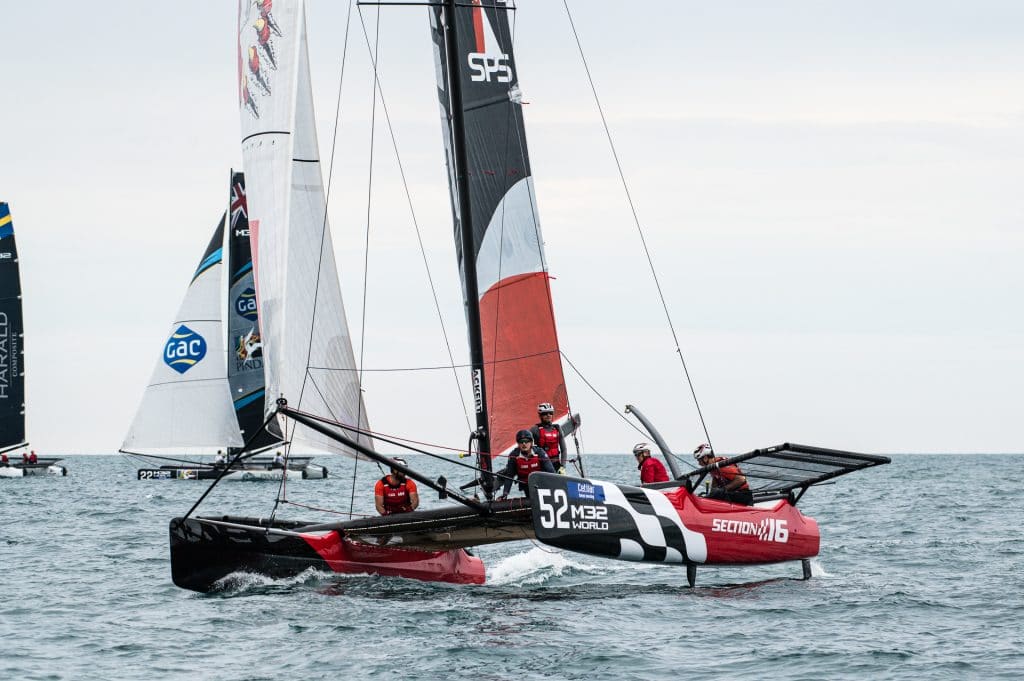 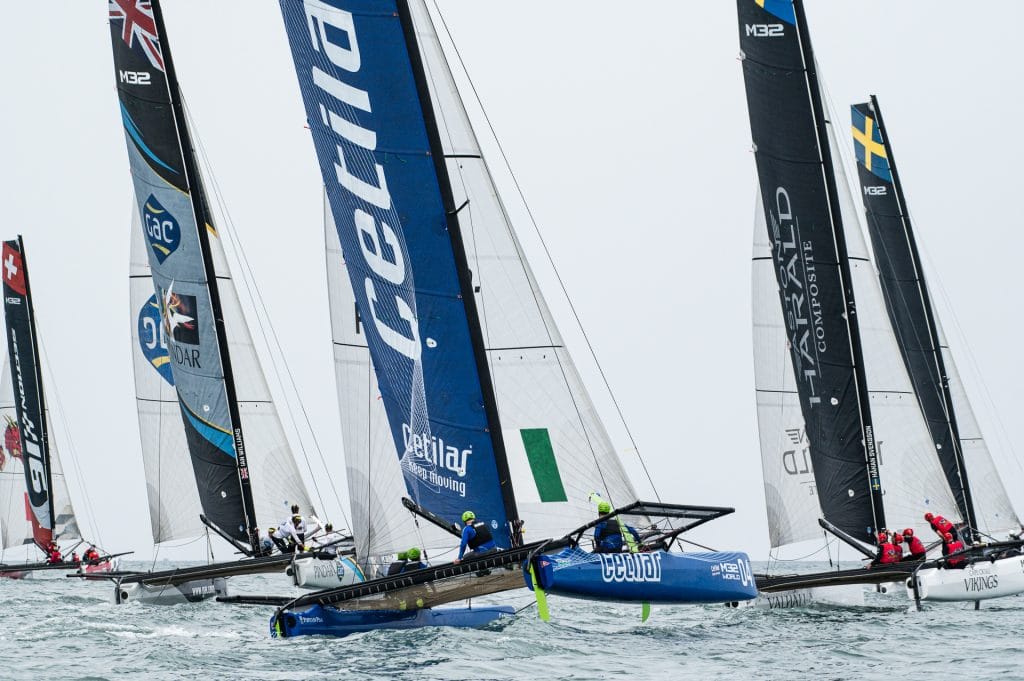 By the start of the second race the wind had dropped another knot or so and racing was back into light weather mode. Not that this made any difference to the aggressive play for pole position on the start line.

Having seen how successful Williams and his GAC Pindar had been at the pin end, Spindrift racing and the Danish Youth Vikings decided to challenge for Williams’ favourite spot. And while the British skipper fought hard to hold his favourite place on the line, his defence came at a price.

Avoiding the three way scrap to leeward, Davies shot across the line from the middle with sufficient speed to win the 300m dash to the reaching mark. From there he had clear breeze ahead and capitalised on it, extending his lead considerably by the bottom gate.

For a while there was a complete change of guard at the front of the fleet as Marco Radman’s Centro Vela Sunset was in second. But by the bottom of the first run GAC Pindar had muscled their way from fourth into second in an impressive burst of speed.

And they weren’t alone. Richard Göransson and his team aboard Inga from Sweden had been taking big leaps through the fleet from time to time. Working their way into second halfway through this race was another example of his team’s enthusiasm and persistence.

“Given that we’ve only done eight days of racing in the M32 I’m really pleased and it’s nice to see Richard Davies win a race. That gives us all hope,” Göransson said after racing. “We really like the M32. There are some boats in the world that really grab you and this is definitely one of them.”

While the close racing and place changes were interesting to watch, the weather had other ideas as the breeze decayed even further as the rain settled in. As if marking the end of the race the breeze switched off entirely forcing the race committee to draw a line under the three day event.

Despite some close racing and the threat of a charge from the middle ranks, little had changed in the overall stakes with Williams’ GAC Pindar team taking the overall win, Spindrift racing finishing second and Richard Davies’ Section 16 taking third.

“I’m quite humbled to be able to take the podium with Spindrift and GAC Pindar because they really are two big pro teams and as an amateur it’s great to be able to get up there and take the fight to them,” Davies said.

For Williams, his team had came in as favourites and had delivered on that expectation, but he was under no illusions as to what was happening within the fleet: “It’s great for GAC Pindar to come out on top here in Pisa, it’s a great start for us, but the standard has definitely gone up since last season, we have more boats on the start line too and a higher standard of racing and as a result we are going to have to keep improving if we want to keep winning.”

The M32 European Series now moves to its second event in Medemblick, Holland over 21st-23nd June.