With two bullets and just one finish off the podium, Wilson’s Chicago-based team led by six points at the end of day one on Saturday only to watch this dissolve to nothing initially today.

“It is a very high level,” said Wilson of the M32 racing. “You always have to be paranoid that people will try to beat you and you have to keep working really hard to make sure that doesn’t happen. We started off today with a six point lead and immediately lost it.” In today’s first two races Convexity had scored a 6-5 before returning to form, again staying on the podium in each of the remaining four races. “Fortunately we were able to come back and end it well,” mused Wilson.

For this event, Wilson’s World Championship-winning tactician Taylor Canfield was unable to take part and was replaced by Olympian and America’s Cup sailor Andrew Campbell, but otherwise the crew was the same as raced in Riva del Garda in September including Kinley Fowler on mainsail, Ted Hackney on trim and Josh McCaffery.

“It was great to come back to Miami and win the North American Championship,” concluded Wilson. “M32s are just a ton of fun to sail. It is really down to just every little movement on the helm and every little bit of sail trim – just very small differences. The way you sail the boat has a huge impact on boat speed. I’ve had more fun sailing on this boat than any other.”

Winner of day two was the defending M32 North American champion, Rick DeVos’s REV on which six time Match Racing World Champion Ian Williams was calling tactics. However their score was not enough to prevent Convexity from coming out on top overall. 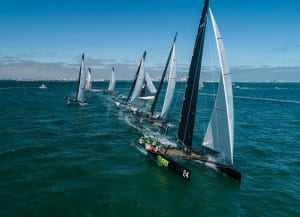 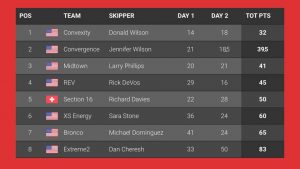 As was the case at the M32 World Championship in September one of Wilson’s main contenders was his sister Jennifer on board Convergence. She finished the opening day in third place overall and was second in today’s opening race but in the following race was involved in a collision that caused enough damage to put both Convergence and Dan Cheresh’s Extreme2 out of the running for the rest of the day. Ultimately Convergence was awarded average points for her remaining races leaving her second overall.

Other surprises this weekend were the wholescale improvement of Larry Phillips’ Midtown which ended the opening day having won the second race and ultimately ending up a close third to Convergence.

With his mostly new crew, Richard Davies and his Section 16 had made the voyage across from Switzerland and ended up fifth this weekend. “It is always nice coming back to Miami,” Davies commented. “It is normally sunny and warm here with good breeze. Compared to being a European winter it is good fun racing…”

The M32 North Americans marked a welcome return to the fleet of Michael Dominguez’s Bronco after a four year absence. Following a slow start on day one, the Rhode Island-based team won today’s fourth race. Along with Bronco, their backer the US patio and umbrella company TUUCI hosted Saturday’s post-race social gathering.

Another new feature of this event was its second female helm after Convergence’s Jennifer Wilson in Sara Stone, who took the helm of XS Energy in place of Ryan DeVos, finishing the weekend sixth overall.

The event was also a successful trial for the new carbon fibre mast for the M32. All eight boats were fitted with the new spar prior to this weekend’s racing and it proved a worthy replacement.

Racing on Biscayne Bay resumes over January 10-12 with the first round of the Miami Winter Series.