Explosive last race decides World Championship
The stage was set for a grand finale day of racing on the last day of the M32 World Championship.   As all boats headed to the course the top 6 boats headed out to the race area with the had clear intentions of spraying champagne and taking the trophy home as winners. Cascais delivered the perfect conditions for the show with a solid northwesterly breeze of 16-20 knots. Team’s had experienced more extreme conditions during the week but for the last race it was, of course, blue skies and sunshine.

Going into the 19th and last final race for the regatta it became clear that 4 boats, Bliksem with Pieter Taselaar, Midtown with Larry Phillips, Extreme2 with Dan Cheresh and Convexity with Don Wilson were going to fight it out for the Championship. During the day all each these teams had been on top of the scoreboard and single points separated them up to that point. After a clear start it was “all-on” for a race full of lead changes, impressive tactics and some desperate moves. Not until the last leg It was not until the final leg of the race that Convexity passed the boats they had to be in front of and won the World Championship with just one point ahead of the second place boat. 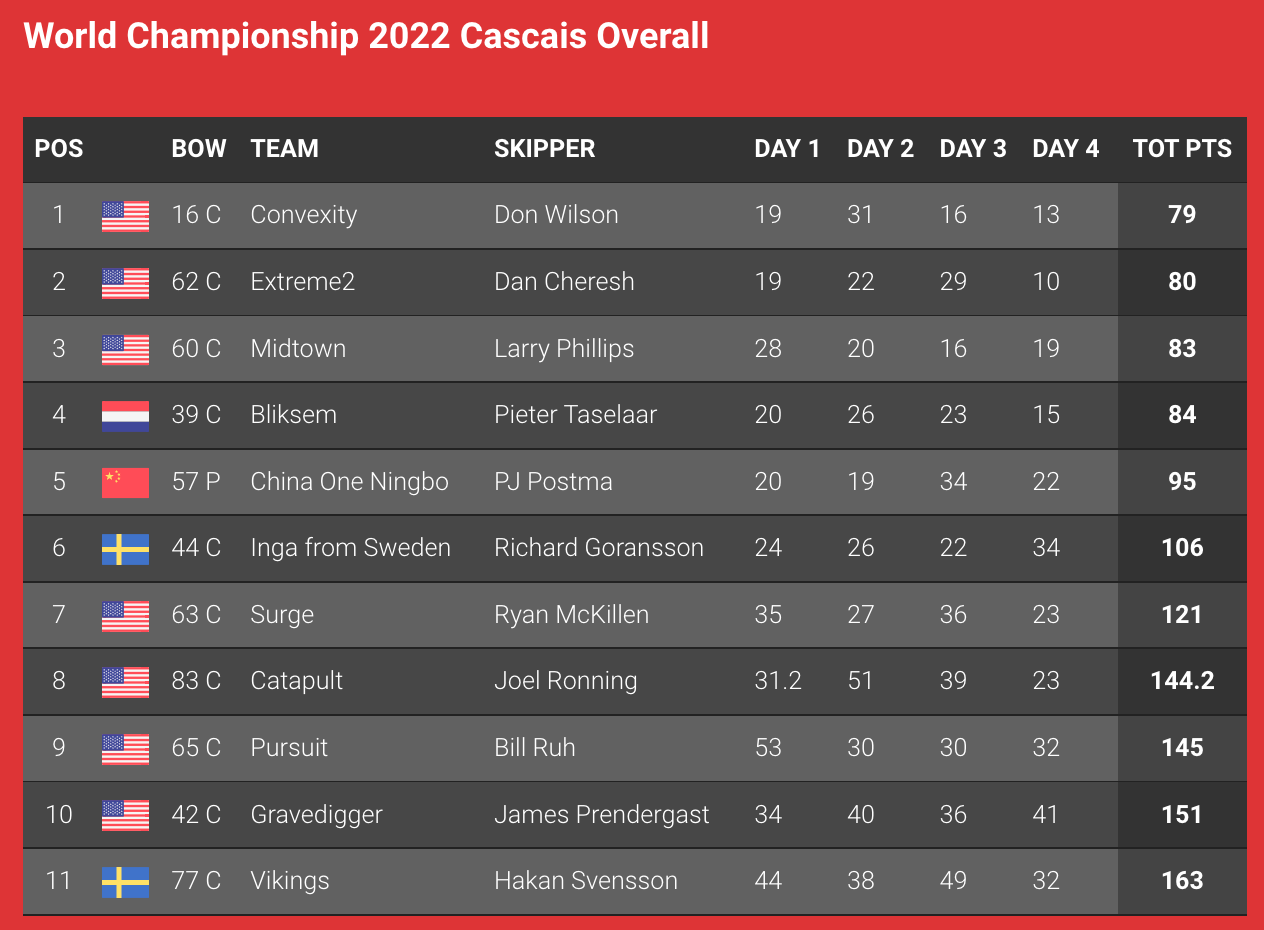 Larry Philips on Midtown commented “It was a great week of racing. It could have gone either way in a lot of races. We had a really good week, we sailed really fast and the conditions were great for us and we’re happy to have a bronze medal (?) 3rd. Our goal was to be on the podium and today we were fighting for the 1st place and it all come down to, not only to the last race, but to the last leg of the last race, which was unbelievable. I think all the fleet is in agreement that this is some of the most exciting racing we’ve ever done.”

Dan Cheresh on Extreme2 said “It doesn’t get better than this last week. The Race Committee work and the level of competition were remarkable, the conditions of massive waves were challenging, the teams were great, and we came up short one point, but we are happy that we were in the hunt, with all coming down to the last leg of the last race. It was tremendous.”

“They didn’t make it easy for us” said Don Wilson of Convexity at the award ceremony and continued, “it was just great sailing, for all the boats to be so tight and to just come down to the little things is really amazing.”
Full Results at m32world.com/results/

The teams have had a wide variety of conditions it all during the 19 races of this World Championship. Being the last regatta of the season the focus now shifts to next year. The 2023 season is starting in Miami in January and coming to a close at the World Championship in Newport RI.
2023 Schedule m32world.com/calendar/