Next event in Miami
The March event, with a record 13 entries so far, marks the end of the fight for the Rooster Trophy, the infamous trophy for the Miami Winter Series. Leading the series going into the event is Pieter Taselaar’s team Bliksem. Only one point behind is last winter’s winner and reigning World Champion Don Wilson with his team Convexity. Another handful of boats is fighting for the podium lead by Jennifer Wilson’s team Convergence. m32world.com/results/

New Miami Event – The Sandbar Cup
The fleet simply could not get enough of the fun in the sun, and the racing in Miami will be extended with another event in April. The “M32 Sandbar Cup” will score as a separate event and have more of a laid back setup when it comes to changing skippers and crew between races. “This will give teams an opportunity to invite friends and have them experience the racing. We plan to cap the season off with a social after-sail party literally on the famous sandbar off of Miami,” says Dave Doucett of M32 North America. m32world.com/calendar/

European teams getting ready
The M32 European Series will start in May in Sanremo, Italy, but already in April most of the fleet will be in Sanremo for the Warm-Up Regatta. Sanremo hosted a warm-up event already last year, and Yacht Club Sanremo Regatta Chairman Umberto Zocca comments “We are happy to have the class back, and it’s a pleasure for Yacht Club Sanremo to host an event with a fast and exciting boat like the M32.” Last year’s warm-up event was won by Ian William’s “GAC Pindar” that, contrary to sailing superstition, went on to win the entire series. Ian, who is also Class Vice President for Europe says “The class really enjoyed the event in Sanremo last year so decided to come back for two events this year – on GAC Pindar we are ready and raring to get back into the racing after a long break.” A new team on the start line in Sanremo is Harald Vermeulen’s “Leeloo” from the Netherlands. The team tested the boat on one event last season and have joined the Miami fleet for some training this winter. From Sanremo the fleet moves on to Amsterdam, Holland followed by Marstrand, Sweden before going back to the south of Europe. m32world.com/europe/ 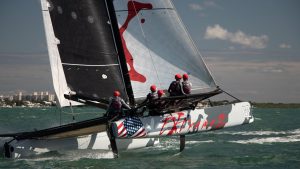 The Class Board
With an updated membership structure, the Class Board, along with the builder and members, continues the work to develop the class, grow the fleets worldwide and to protect the one design integrity. Dan Cheresh, an M32 veteran with his team “Extreme2,” is stepping in again to take on the role of Class President after a short break from sailing. “The M32 Class continues to grow in numbers and in talent, and that growth is occurring in North America and Europe…I’ve never been a part of a class that has been so inviting to potential owners and crews.It’s the most exciting sailing I’ve ever done, and we look forward to seeing the class expand.” You can read more about the board and the fundamental objectives of the class on m32world.com/class/

2020 Sail Order
We are asking all teams place their 2020 sail orders by March 20th, 2020
To ensure that your team receives a build slot, we ask that you place a 20% deposit.
You can submit your orders at our M32 online “marketplace”.
https://squareup.com/store/M32_World

As in prior M32 sail builds, we look to have the sails constructed at the same time. To get an accurate estimate of production we ask for your input. Our goal is to have the sail available for delivery for the Newport Midtown Cup and Amsterdam events in June. Please take into account your November 2020 Worlds inventory in this order. 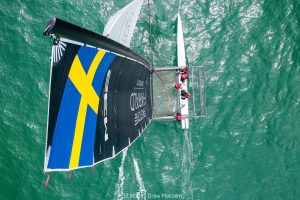 Sails Information
M32 and the M32 class association has been working closely with North to deliver the most consistent and highest quality product. A focus on consistent shape, consistent finish, and consistent size is fundamentally a core part of what the M32 class is. Please read this article which has been published on the North website addressing the one design focus of constructing your sails.
Link to North Sails M32 information HERE

Update for 2020:
-At the request of the class, the sail shapes are remaining unchanged in 2020.
-The batten pocket end finishing is going to be changed from cuben fiber to 3Di utility cloth for increased durability and smoother finishing.
-The luff lengths for all the sails are identical, the specifications for luff tape and bolt rope tensions are further refined to be within 5 kg of each other.

The M32 Demo Boat and Academy
Joining the class is made easy with the M32 Demo Boat and the M32 Academy. “With the Demo Boat we can create a tailor-made introduction to the M32 based on the team’s previous experience,” says Jakob Wilson, M32 Product Manager at the builder Aston Harald Composite. With onboard coaching and training a few days before the event, a silting team will quickly get comfortable in the M32. The Demo boat will be available in the Miami events and in Sanremo, Italy from March and onwards. m32world.com/demoboat/ The Academy is a few days of focused M32 training to get new teams to feel comfortable in the boat without the pressure of a regatta. Teams are already signed up for academies to be held in Newport and Gothenburg in May and June. m32world.com/m32-academy/ 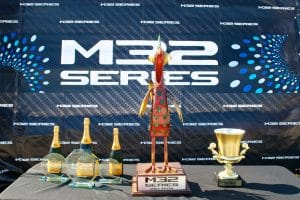 New mast up and running
The new mast for the M32 has now been used for three events after its implementation in the class rules after the last World Championship in Riva del Garda, Italy. The new mast increases the safety margins significantly. This has been achieved with updated geometry and enforcement in the laminate. There is no difference in the profile and only a 2kg weight increase. The purpose has not been to increase performance but to make a mast that is safer and easier to handle. The old masts are allowed in the class rules without a time limit. Mattias Dahlstrom, Class Manager, comments, “This has been an 18 months project that we are now seeing the benefits of. I would like to thank all those involved in making this a success. Being a one-design class, it is a tough decision changing something this important, and I’m impressed with the way this has been handled by the class board, the teams, and the builder. A problem was identified, different solutions evaluated followed by a long test period, and finally, a successful implementation.” The new mast is produced at Aston Harald Composite, the company that also is building the boats. Jakob Wilson, M32 Product Manager, has been involved in the process all the way and adds “Having the new mast built in-house gives us more control over quality, deliveries and customer service. We can support the fleet in a much better way now, and through the M32 Academy we can assist with tuning guides, education and training.”