Competition will resume on the M32 European Series for the high performance one design catamarans in 2020 with a five event circuit straddling Italy and Sweden. The Series will have a warm-up/training event preceding it and will culminate in a European Championship on Lake Garda.

Between 8 and 12 boats are expected to compete at each event including some visiting teams from the USA. Once again at each event the M32’s manufacturer Aston Harald Composite will be making available a demo boat to teams looking to join the M32 circuit but who initially wish to experience its hot competition.

For the first part of 2020 the M32 European fleet will base itself in Sanremo, Italy close to the French border, within easy reach of Nice airport. This was the venue for this season’s warm-up. In 2020 teams will be visiting three times: The first two will be monthly warm-up events in March and April, before the 2020 M32 European Series kicks off at the Italian venue with its first scoring event towards the end of May.

“We’re going back to Sanremo because this year Yacht Club Sanremo was an excellent host, there are good facilities and generally it worked well. It was liked very much by the teams,” says Mattias Dahlstrom, who manages the M32 Class Association, which a year ago took over running the M32 European Series. “Staying in one venue allows the boats to remain rigged and ready to go between events.”

As in previous seasons, the warm-up events are welcomed by the teams. These full on races enable them to get fully into gear ready for the first scoring event of the season while providing a preliminary gauge of the competition. M32 coaches will be available for the warm-up events while Aston Harald Composite will also be making a demo boat available for these as they did with great success this season.

Jakob Wilson, M32 Product Manager for Aston Harald explains: “The demo boat program is a great opportunity for teams new to the class to get to know the M32. With the M32 Academy and the different programs, we can deliver tailor made coaching depending on the team background in keelboats or other multihulls”.

From Sanremo, the M32s head north, returning in mid-June to the Netherlands, where the circuit has strong ties through former Olympic Finn sailor PJ Postma and M32 Class Association President Pieter Taselaar’s Bliksem team. For 2020 there has been a change of venue, moving to Westeinder Lake, close to Amsterdam’s city centre and right next to Schipol airport.

“We call it Lake Amsterdam because so it so close to the city,” says Postma. “It is a huge lake where there is a lot of racing. For the last few years we have done quite a lot of M32 training there. It has flat water and typical Dutch conditions with good breeze. We are really looking forward to it and Pieter (Taselaar) is super keen because there is a big restaurant on the lake and it is near Amsterdam, so the social part will be covered. We have some trips planned into town!” 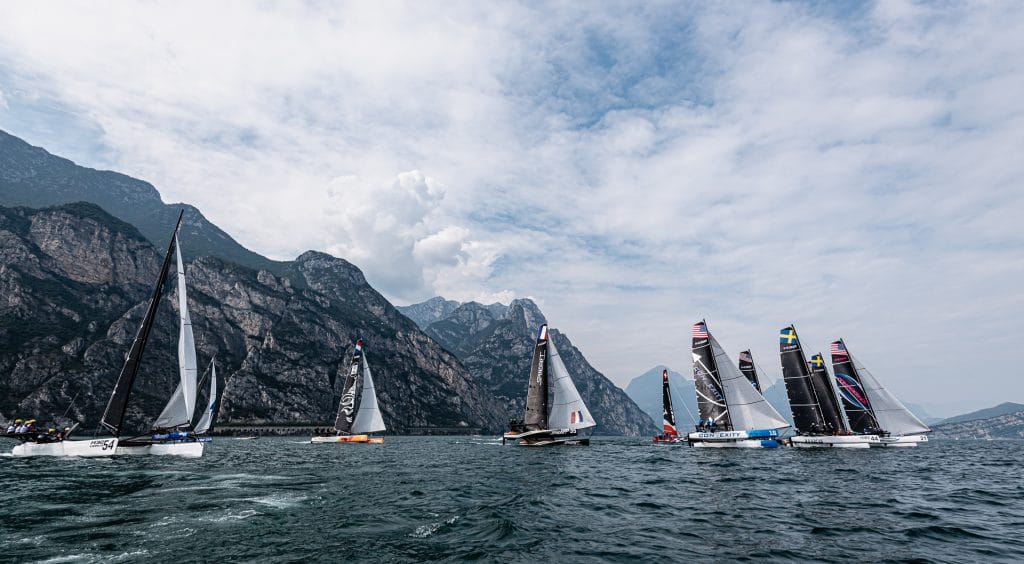 No M32 European Series is complete without a visit to Sweden, birthplace of the M32. Mid-July, the third event will once again take place in Marstrand, the top holiday destination on the Scandinavian nation’s west coast. Here it is likely that the M32 European Series line-up will be boosted by some more local entries.

A fourth event in mid-August will take place in a venue soon to be announced, before the M32 European Series concludes with an event also doubling as the M32 European Championship, to be held in the multihull mecca of Riva del Garda, Italy in early September, hosted by the Fraglia Vela Riva. “With its stunning scenery, flat water and potential for strong wind, its one of the best venues in the world for catamaran sailing,” states Dahlstrom. “Everyone very much enjoyed our successful M32 World Championship there this year.”

M32 Class Association Vice President, Ian Williams, skipper of GAC Pindar commented: “The M32 Class Association is pleased to announce for 2020 our seven event European season, spread over five tried and tested venues, all finishing in time to ship boats to Miami for the 2020 M32 World Championship. The M32 European Series has shown solid growth since the Class Association took over the running of it a year ago, and in 2020 we look forward to building on that success as we welcome more new owners into the class.”
The 2020 M32 European Series has been scheduled to avoid any clashes with its equivalent series in North America. The European Series concludes allowing adequate time for teams to ship their boats to Miami for the 2020 M32 World Championship at the end of November.

As usual the circuit will have consistent race management through the year including Dahlstrom, who doubles as the circuit’s Principal Race Officer. There will be the same umpire team and safety officer event to event.

Details of the participant line-up will be announced in due course.