Today off the Swedish paradise island, Pieter Taselaar’s Bliksem team won an astounding five of the six races sailed and holds a formidable lead after day one of his first ever M32 European Series event. The Dutchman, who has been based in the USA for more than 20 years, is in Marstrand racing a boat chartered from M32 builder Aston Harald to check in with the European fleet as part of his training for the impending World Championship.

“I didn’t know how we were going to do – this was definitely a lot better than expected,” admitted a jubilant Taselaar. “It seemed that the first five starts everyone was setting up a little early and we had some room to poke in there and hit the line at full speed. The start was important today because it was a short reach and a short course.”

Racing today was held to the west of Marstrand Island in a 8-12 knot southerly that slowly veered to 200° and dropped marginally. However with an overcast sky and a chilly Baltic wind it was far from summery. The wind being relatively stable favoured the boat that won the start and was first to the reaching mark. “There weren’t a lot of shifts,” continued Taselaar. “Once you won the starts it was difficult for people to pass.”

Having previously raced with America’s Cup catamaran tactician Tom Slingsby, Taselaar now has Australian match racer Keith Swinton calling tactics for him. “We have been sailing pretty well,” said Swinton as to whether today’s results were an aberration. “We won the event before last in Newport and today it was similar conditions to that. In 12+ knot conditions with full main, we seem to go well.”

In the southerly breeze, the winning boats were typically playing the left side nearest the rock-strewn coast. “The left was paying nearly every race except the last one,” explained Swinton, who has sailed in Marstrand countless times before match racing. “Today current was a factor and there was pressure on the left – especially the top left, where there was land influence.” 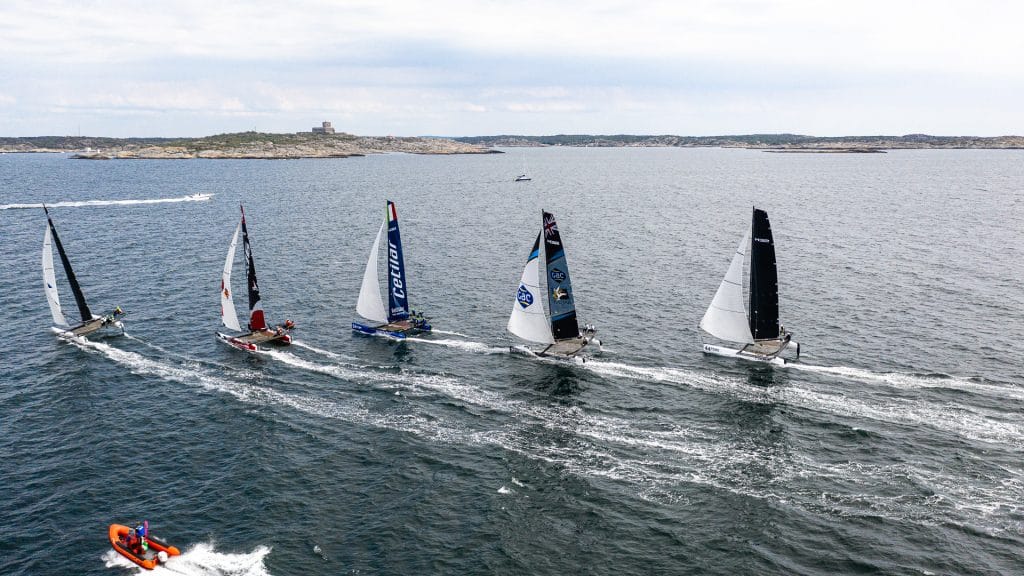 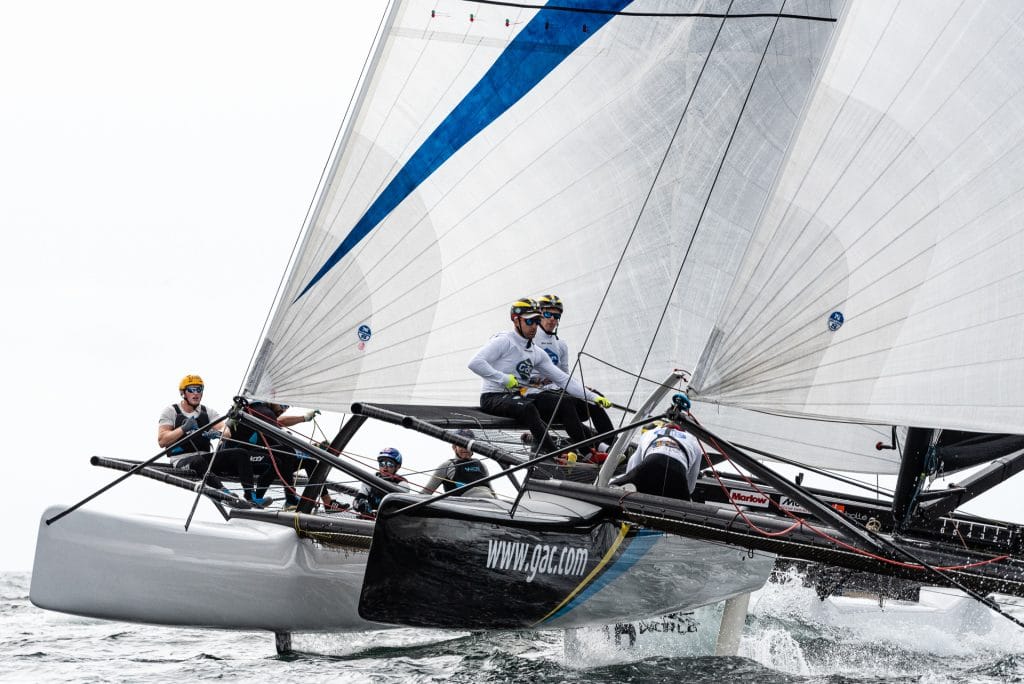 Finally in today’s sixth and last race, a chink in the Bliksem armour appeared when Richard Göransson’s Inga from Sweden held the Dutch/US team up at the start to lead into the reaching mark. Inga from Sweden, which has joined the M32 European Series this season, led for the next lap until the final beat, when, in a four way fight to be first into the final reaching mark, it was Ian Williams’ GAC Pindar team that popped out in front.

As Williams described it: “We were in second and then we slipped up the first beat to third or fourth. But we got the right gates calls top and bottom and on the last upwind managed to get a nice high mode and set up inside Richard Davies and held him outside past layline and just crossed Richard [Göransson] on port on the way back.”

Winning this race was small consolation for the slow start the match racing legend made today, not helped by an OCS in race two. “There were a few stupid mistakes, but we got it together,” Williams said. “Then the wind dropped off, which helped us. A lot of this is about being able to sail your mode and keeping manoeuvres down. There are a lot of nuances to this and some are outside of your control.”

Holding second place overall at the end day one is Zurich-based Brit Richard Davies’ Section 16. “We had a really good, solid day and had good races,” said Davies. “The wind started to die away a little towards the end when maybe we should have gone upwind gennaker on the last port tack. Our speed was good and our high mode was really good. We are continuing to build towards the Worlds and we are pretty happy with the way it is all going.”

Trying his hand at M32 racing for the first time today here in Marstand was Swede John-Christian de Champs and his White Sound crew, including former Phil Robertson right hand man Garth Ellington. “Today was great, short intense races which were really good quality and fun,” said de Champs, who has a background in Melges 24s and most recently F18 catamaran racing. As to why he is sailing the M32 this week, de Champs says: “I tested the boat back in 2012. Since then I’ve been following it from the sidelines and this was just a good opportunity to try racing it. I know Richard Göransson very well and I know he is super happy with the sailing the boat, so that encouraged me into it.”

Racing continues tomorrow with a first warning signal scheduled for 1300 local time when the wind is forecast to be marginally lighter than today.