While her brother Don’s Convexity came out on top on day one of the M32 Pre-Worlds on Lake Garda yesterday, today it was the turn of Jennifer Wilson and her Convergence team to turn on the after burners, three bullets winning her the regatta by a three point margin.

After the Ora southerly failed to materialise yesterday, when PRO Mattias Dahlstrom and the race team from the Fraglia Vela Riva still managed to lay on four races in a light late afternoon northerly, today, with worse conditions forecast, the eleven M32 catamarans were sent out on to the race track early, ready for a 0930 start. True to forecast, come start time the wind was strong enough that the northerly not only held until most of the way through the day’s sixth and final race, but was strong enough (14-16 knots) initially to warrant a reef being put in.

“We were quite pleased,” said Jennifer Wilson of her victory. “It seemed like the first downwinds were quite short, so the start was very important as was getting on to port early.”

A string of seconds from Convexity today ensured second place for Don Wilson’s team. “It was good racing, tight. We didn’t do great starting and there was one race where we won the start and weren’t OCS when there was a general recall. The main thing we need to work on is our starting but the boat feels pretty good around the course,” said Wilson, for whom new America’s Cup skipper Taylor Canfield is calling tactics.

While he had a disappointing Saturday, Zurich-based Brit Richard Davies turned his fortunes around, his Section 16 overhauling Ian Williams’ GAC Pindar to claim third place at the M32 Pre-Worlds, even winning the sixth and final race today when the wind turned patchy. “We had a really good start and led around the reach mark,” described Davies. “It was super light so we said ‘don’t worry about direction’ just sail in the streaks of pressure. We were between two winds on the first downwind but we managed to make it round the left hand mark and it was pretty tense with a lot of gennaker on/gennaker off. It was typical Garda…”

However their performance today wasn’t enough to prevent Williams’ team from claiming the 2019 M32 European Series overall title at the end of this its fifth and final event, the season having started with a warm-up sesson in Sanremo, Italy before starting in earnest in Pisa then moving on to Medemblik, Holland and then two Swedish events – in Marstrand and Stenungsund. At the M32 Pre-Worlds, the match racing legend was just four places ahead of Section 16 but finishing yesterday’s racing second to Section 16’s ninth all but sealed it for Williams, aided today by winning the penultimate race. 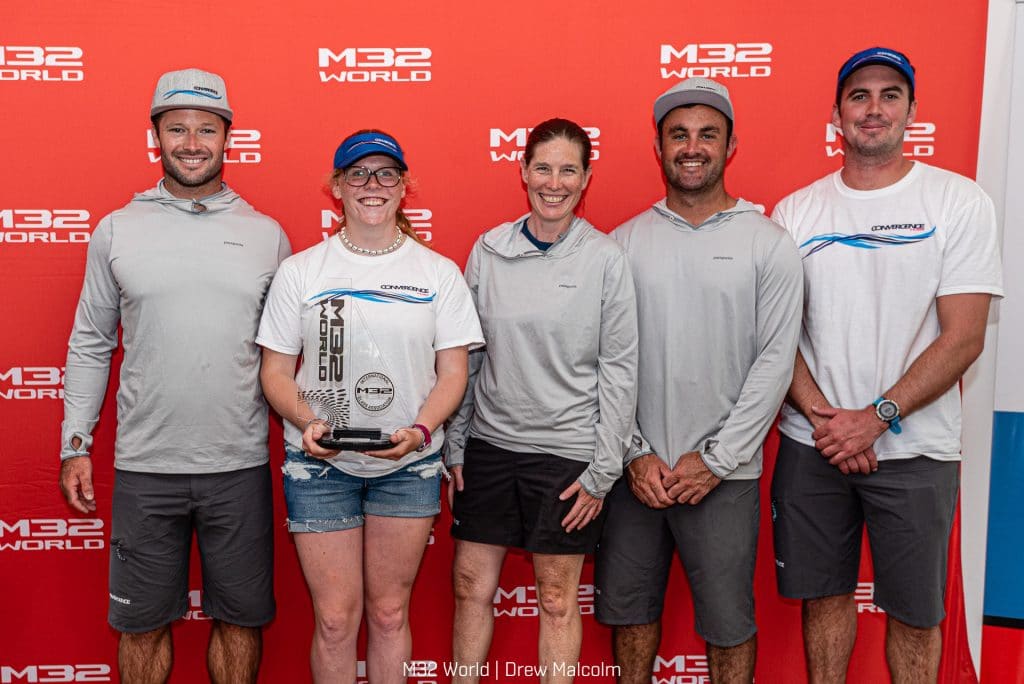 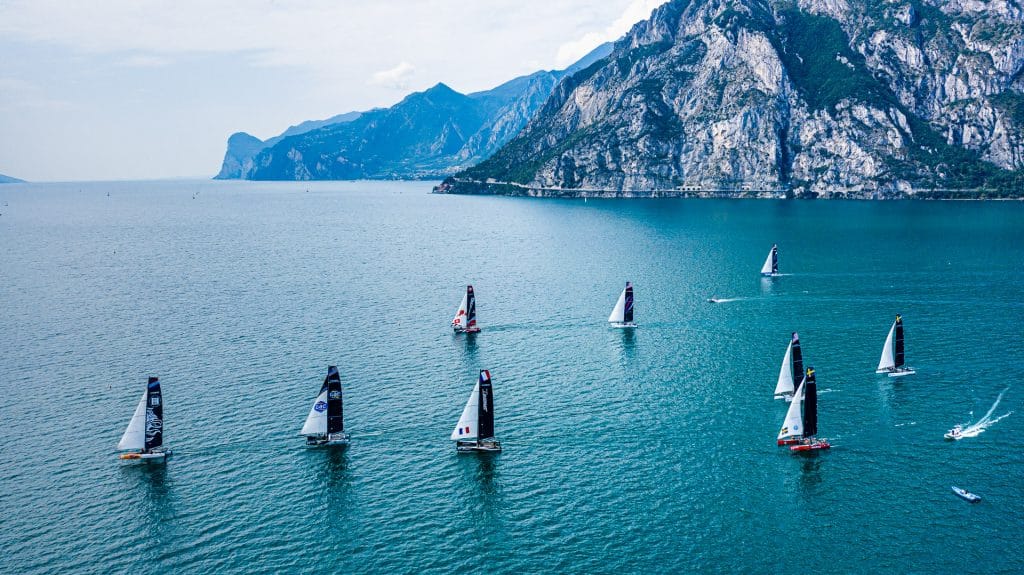 “We are really happy to win the M32 European Series,” said Williams. “Richard put up a great fight and snuck past us in the regatta. In an 11 boat fleet it was definitely possible to beat us, especially given that we have a new group on board [helming here is Dan Cheresh, with Williams moving to tactics]. We had a very good day yesterday and a tricky day today, but we hung in there.”

Richard Davies ended the 2019 M32 European Series second overall, but won the Corinthian prize for owner-drivers. “We couldn’t quite take it to Ian at the end,” Davies admitted. “But it was pretty close considering he is a six time World Champion and it is nice to have beaten Spindrift…”

Today another favourite for this year’s M32 Worlds began to show some of the same form that caused them to dominate last month’s M32 European Series Marstrand. Pieter Taselaar’s Bliksem won the second race to end the day fourth and the Pre-Worlds fifth (up from 10th overall yesterday).

“We tried a couple of new things which didn’t work too well, but we got a lot of the kinks out of the way. We also missed a bit of alertness and adrenalin,” admitted Taselaar of their overall result here. As to the race they won today, Taselaar said that they enjoy it when the breeze is up: “With a decent start, if you can get around the top mark in the top three or top five then you are in good shape. Winning that race was just down to a decent start and executing well – nothing special. I still don’t think we sailed great today.”

At the prizegiving for the M32 Pre-Worlds and the 2019 M32 European Series, Mattias Dahlstrom congratulated the winners. He observed that with 20 teams trying their hand at racing the high performance one design catamaran over the course of this season (with the Series now under the management of the M32 International Class Association) and many likely to return, the 2020 M32 European Series is looking strong.

Tomorrow is a day of measurement before the 2019 M32 World Championship begins in earnest on Tuesday.