Top teams from both sides of the Atlantic and sailors from across the globe are currently converging on the sailing mecca of Lake Garda for the leading events of the season for the M32 catamaran class.

Taking place this weekend, over 24-25th August out of the Fraglia Vela Riva in Riva del Garda, the Pre-Worlds will double as the concluding event of the 2019 M32 Europe Series. This year the M32 Europe Series began with a warm-up in Sanremo, Italy in March before scoring events started in Pisa at the end of May. It has since visited Medemblik in the Netherlands and Marstrand and Stenungsund in Sweden, the spiritual home of the M32 catamaran where it is built by Aston Harald on the island of Hönö.

The Pre-Worlds lead straight into the M32 World Championship over 27-30 August, following a day of measurement on the 26th. This will be the third M32 Worlds following previous events in Marstrand and Chicago, since the M32 became a World Sailing International Class in 2016.

While duties with his Chinese team on the SailGP circuit are preventing two time M32 World Champion Phil Robertson from returning to defend his title, Ian Williams, who called tactics on Rick DeVos’ Rev in Chicago, when they finished second and top owner-driver team, is back. Again for this year’s World Championship Williams will be in the tactician’s role, but this time on his own GAC Pindar boat and with M32 International Class Association President American Dan Cheresh taking over the helm. Cheresh steered his own Extreme2 to sixth place at the World Championship last year.

Significantly, it will also be the first time this season GAC Pindar has sailed five, rather than four, up, which could prove valuable in the stronger winds expected on Lake Garda.

For the M32 World Championship Williams’ boat will be rechristened GAC Pindar / Extreme.

GAC Pindar will be joined by other top teams from the M32 European Series, notably Yann Guichard’s Spindrift racing, being helmed once again by another former Olympic Tornado sailor Xavier Revil. At the M32 European Series Medemblik in June, the professional Franco-Swiss team became the first to break GAC Pindar’s winning streak.

Zurich-based Brit Richard Davies and his Section 16 team have been firmly on the ascent on the M32 European Series this year. After their second place in Marstrand in July, Section 16 managed to leapfrog both GAC Pindar and Spindrift racing to take the lead overall in the 2019 M32 European Series. “We are in a good place. We think we have improved every regatta,” said Davies.

New to the M32 European Series this season is Richard Göransson’s Inga from Sweden. Göransson may still be getting to grips with racing on two hulls, but he has been a long term campaigner in the Melges 32 and 40 and 6 Metre monohull classes. His crew comes with strong catamaran sailing experience in Britain’s Mark Bulkeley, plus Brad Farrand and Tom Powrie. 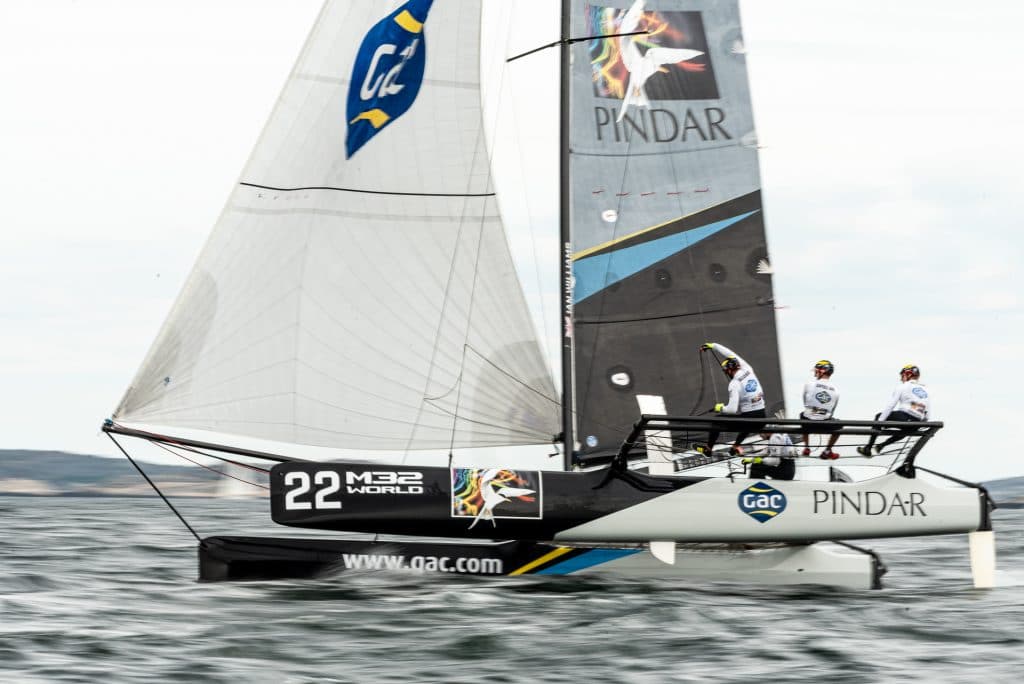 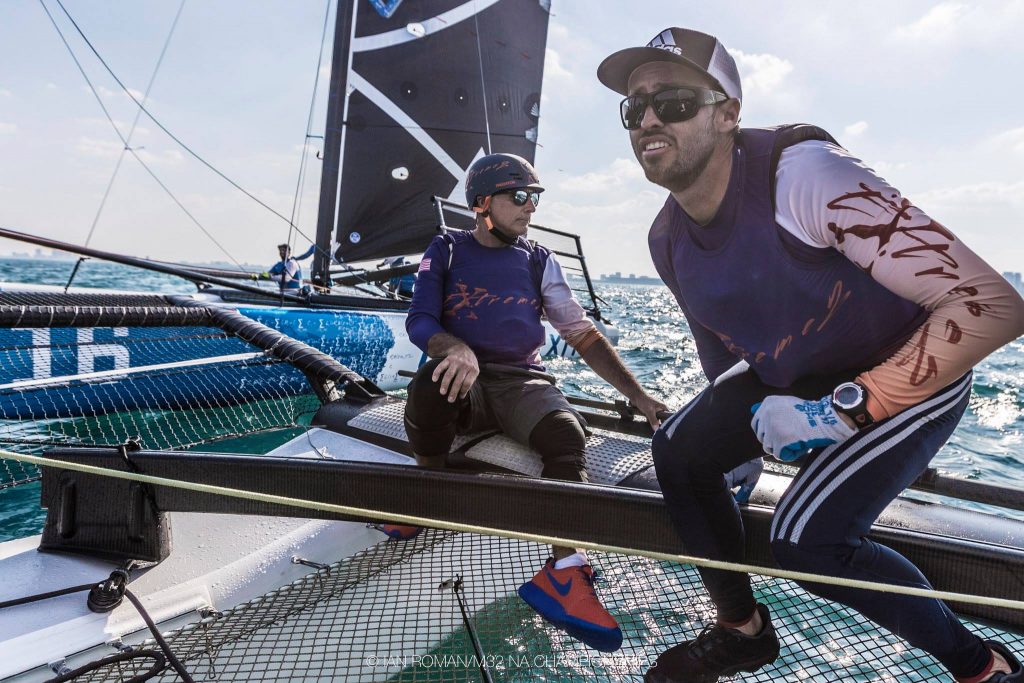 Two of the strongest teams coming across from the USA are also among the oldest. Don Wilson, founder of the Chicago Match Race Centre has been campaigning M32s almost since the dawn of the class. Having won this year’s M32 Miami Winter Series, his Convexity team will be one of the strongest contenders in Garda, with a crew including former Match Racing World Champion, and imminent America’s Cup skipper, Taylor Canfield from the US Virgin Islands.

The Wilsons’ campaign is a family affair. His sister Jen Wilson will be campaigning another M32 Convergence and among her otherwise strongly Antipodean crew of match racing specialists – Chris Steele, Will Tiller and Ricky McGarvie – is Don’s 17-year-old daughter Ava. Convergence has also been achieving good results in the US and this summer finished third at the Midtown Cup and second at the New York Yacht Club Annual Regatta.

Another US-based team set to do well is former Melges 32 World Champion, New York-based Dutchman Pieter Taselaar and his Bliksem crew, on which Australian match racer Keith Swinton calls tactics. Fresh from winning the New Yacht YC Annual Regatta with a race to spare, the Bliksem team came across to Europe for some practice last month and ended up dominating the M32 European Series Marstrand.

“We have a pretty good set-up,” said Taselaar. “We are really fast and Keith and I have got the starts down pretty well, so I think we compare well against the American fleet and the European fleet. You want to position yourself to place top three, then things need to go your way a bit.”

In recent years Taselaar has raced on Lake Garda in the Melges 32, but a little longer ago, encouraged by his father who was an accomplished racer, competed there as a child in the 420 and the Optimist. He is a fan of the famous Italian lake. “I couldn’t think of a better venue for the World Championship than Garda.”

Two other teams coming across from the USA are James Prendergast’s Gravedigger, with a crew including much second generation match racing talent – Australian Sam Gilmour, Kiwi Stu Dodson and Swede Mans Holmberg. An interesting development is that Larry Phillips’ Midtown has recruited to its ranks another former Match Racing World Champion, New Zealand’s Adam Minoprio, who despite his huge success on other catamaran circuits, will be making his debut in the M32 this weekend.

Coming from the opposite side of the globe is the appropriately named Down Under Racing, campaigned by Australian match racer Harry Price.

Of the imminent M32 World Championship, Class Vice-President, Ian Williams commented: “It is fantastic to round out the season here in Garda with such a strong line-up. More than 20 different teams have competed on the M32 European Series this year, and, with the excellent racing we have had, we hope to see many of them come back to do more events next year.”