Pieter Taselar’s Bliksem team provided a masterclass in success through making the least mistakes rather than winning races on the opening day of the M32 World Championship on Lake Garda. The US-based Dutch team never won a race but never scored worse than a fourth leaving them with a might nine point lead, ahead of Don Wilson’s second-placed Convexity, in turn just a point ahead of Larry Phillips’ Midtown.

Such consistency may only have been possible thanks the Trentino Tourist Board conditions that prevailed today with the southerly Ora wind filling in on schedule for the 1400 start, then building to 16 knot peak in race four. This enabled the race team from the Fraglia Vela Riva led by Mattias Dahlstrom to complete the full five race schedule comfortably.

Bliksem is also renowned for performing when conditions are up, but owner-driver Peter Bliksem reckons they were simply more focussed today, performing when it counts: “We just stuck with the things that work, avoiding big mistakes. The first race we were over early, but Keith [Swinton] our tactician did a good job of chipping away to dig us out. He picked the right shifts and the right sides of the course. It was a good day of sailing in Garda.”

Swinton was surprised by the size of their lead. “I actually thought we made a lot of mistakes, but I guess everyone was having their first day jitters. We made quite a few mistakes but we sailed well enough when it mattered and were reasonably consistent. We have found a pattern that works… Hopefully we’ll get good breeze for the rest of the event.”

Otherwise it was an up and down day for most. Don Wilson’s Convexity won today’s fourth race but scored an eighth in race one, but his sister Jennifer, driving Convergence, winner of last weekend’s Pre-Worlds won both race three and five but also posted three deep results. They also picking up a two point penalty for hard contact with Spindrift racing immediately after the start of race four, then going on to receive two more penalties during that race.

Of the ones Convergence won, Jennifer explained: “It wasn’t so much good starting, it was good positioning on the course. A couple of times we are able to round the right mark and tack and get headed to the right side of the course.” 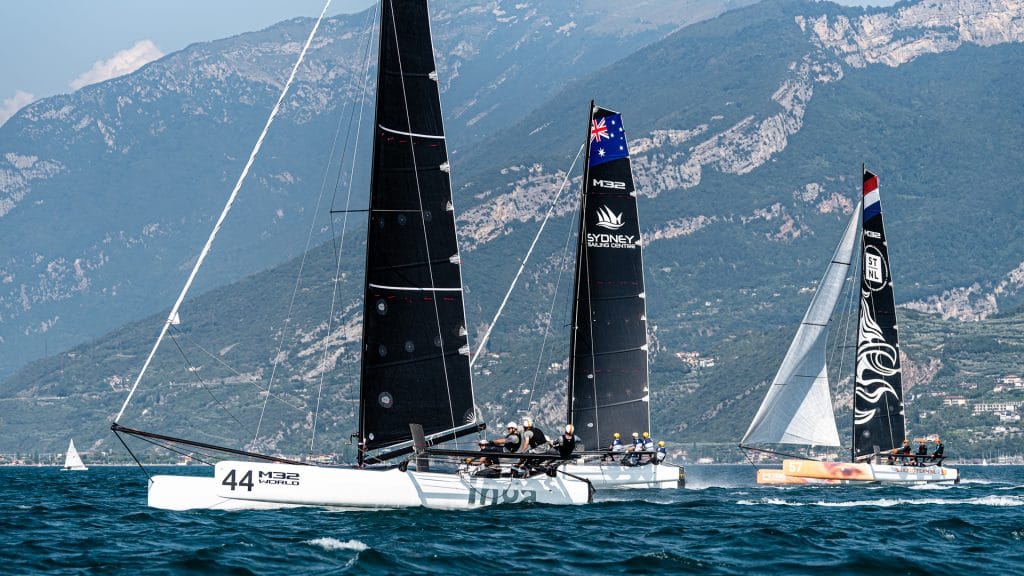 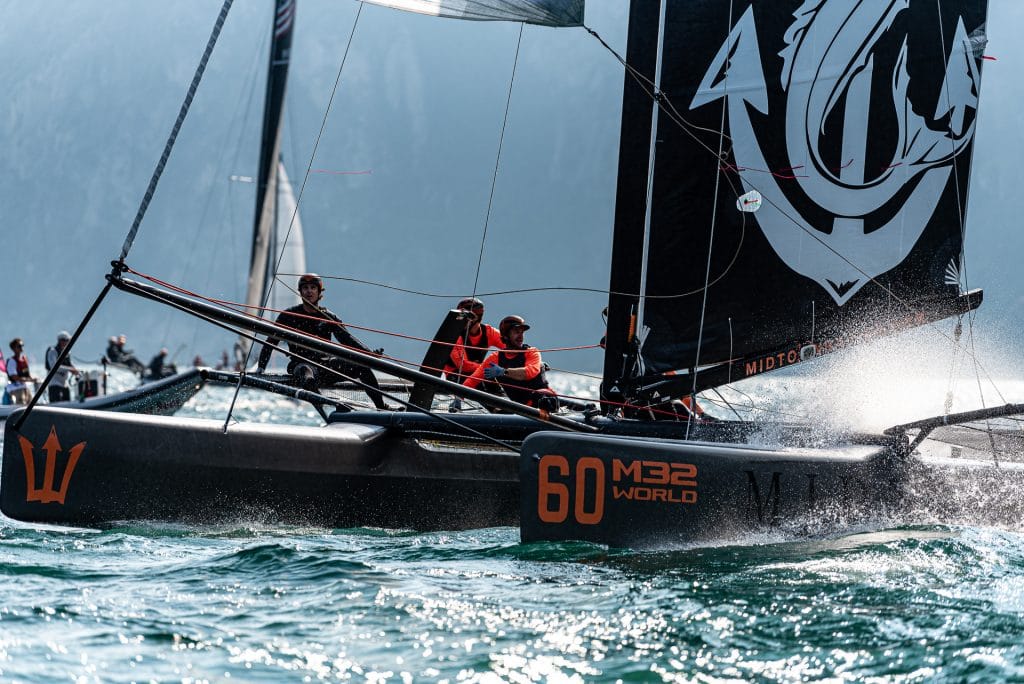 Having an even more black and white day was Dutch Finn legend Pieter-Jan Postma and his fledgling Team NL crew, comprising two young Swedes and two even younger Dutch 49er sailors. After finishing last in the first race, Postma nailed the start of race two, led around the reaching mark and from thence onward seemed unstoppable… However in drama-ridden race four, Team NL’s mast broke. This provided some headscratching for Postma: “We were within the margins, so to have the mast in three pieces, we’re going to have find out why. Fortunately only the mast broke, we still have the diamonds, spreaders and sails. So we will back on the water tomorrow, but we will get a lot of points for today.” They also have a spare mast.

Otherwise Postma is very much enjoying Lake Garda. “It is such a great place with cliffs coming at you and these 12 boats racing. It is an awesome place and a great event to be part of.” However he is most enjoying seeing his young team come together. Given their race two result, they are to be watched.

Another skipper surprised by his position on the leaderboard here is Larry Phillips who’s Midtown won today’s opening race and ended the day third. “We had a great start and then we led the whole way from start to finish,” said Phillips, who only took up sailing nine months ago – the M32 his first boat. “We favoured the right side of the course and talked about that going into that race and that went exactly to plan. When we came hoping to get fifth or sixth place out of 12 boats – we weren’t expecting to get into the top three.” The Midtown crew is benefitting from the talents of top Kiwi Adam Minoprio who is calling tactics on board. “There is some getting used to each other and there have been a couple of heated moments out there when we are not communicating properly but they are getting less and less…”

James Prendergast’s Gravedigger was having a good day until, once again, race four when they suffered a capsize heating it up too much coming out of a gybe. Aside from this their average race result for the day was 3.5 still left them in fourth position, two ahead of the Dan Cheresh’s skippered GAC Extreme 2.