With a less than promising forecast for the afternoon Ora, the call was made to start racing on this penultimate day of the 2019 M32 World Championship at 0830 to make the most of Lake Garda’s morning Pelèr northerly. Despite bleary eyes and caffeine deficiency, the 18-20 knots the competitors encountered as they sailed down the lake to the race area quickly dispelled all sleepiness. Crews also had to realign themselves to the northerly wind and a race course flipped through 180° compared to the previous two days.

Once again the day belonged to Don Wilson’s ultra-consistent Convexity, which sped out of the blocks in the opening race, was first to the reach mark and extended from there, the M32 equivalent of an ‘ace serve’ in tennis. From there the Chicago-based M32, on which Taylor Canfield calls tactics, finished no race lower than fourth.

“A lot of it was down to getting off the line really well,” Canfield explained of their success. “We started a little more up the line and put ourselves into really good spots to have good acceleration. We weren’t leading at many reach marks, but we always put ourselves into a position to be tight in with the front group.”

The main challenge for Convexity came, as expected, from Pieter Taselaar’s Bliksem. The US-based Dutch team, renowned as the M32’s ‘big wind specialists’, claimed the next two races. However consistency eluded them when in race four they were called OCS. “We were in a great position, we had space on the line, but we were called over,” admitted Taselaar. However he enjoyed the conditions, even the early start. “It was great with very steady breeze and lots of it, but still very manageable and a little shifty.”

As a result with their eighth in today’s fourth race, plus a one point penalty for contact at the windward mark in the first race, Bliksem scored 18 points today to Convexity’s 11. This, plus Jennifer Wilson’s Convergence scoring deep results in the final two races plus two penalty points during today’s opening race, has left Bliksem second overall, nine points off the lead. Of their prospects tomorrow, Taselaar observed: “Convexity are still very catchable – we were a bunch of points ahead of them on the first day, but they caught us. Really that is just one race. We will just do our best.”

Just when it seemed to be turning into a two horse race, suddenly two teams came to the fore, both winning their first races of this World Championship. 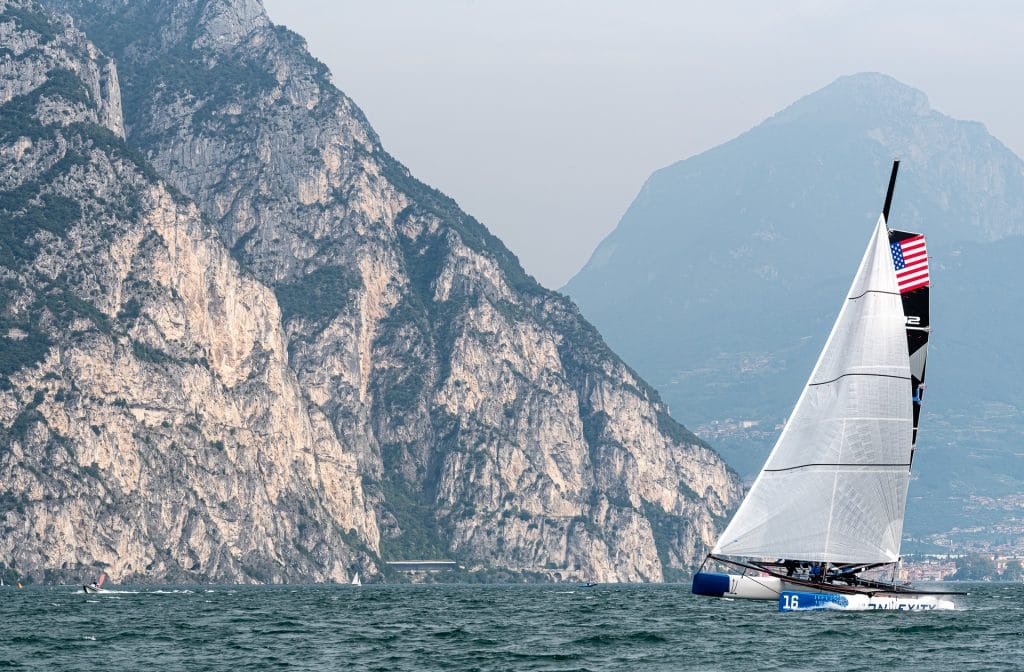 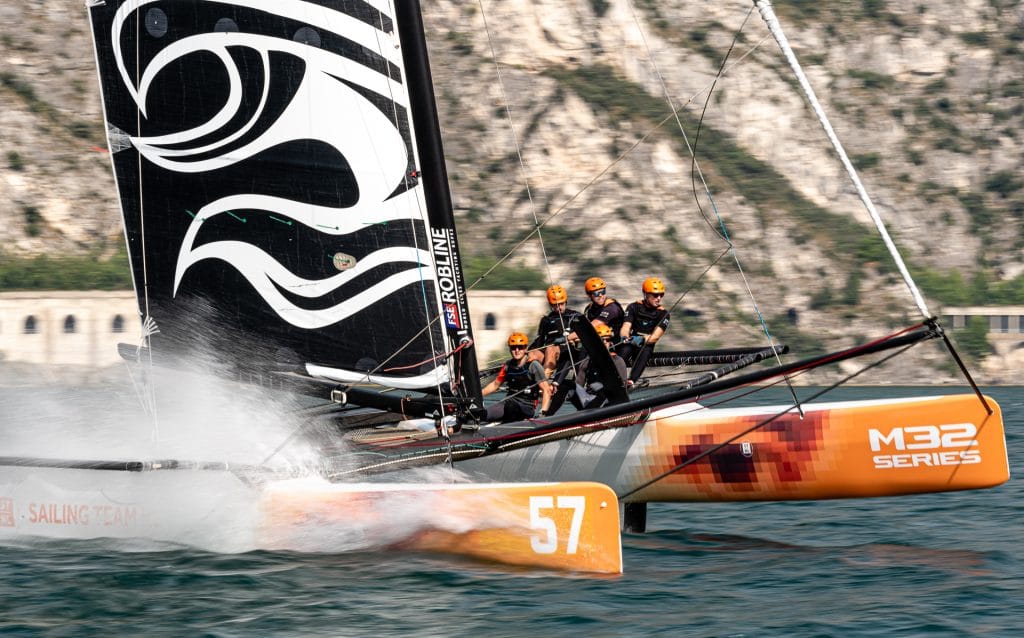 James Prendergast’s Gravedigger had been consistently mid-fleet, a good opening day mired by a capsize followed by a less successful day two. But in today’s fourth race, the US team nailed the start and was first to the reach mark. Victory almost slipped through their fingers when Gravedigger was hunted down by Convexity and sailed off to the windless left side of the first upwind. Convexity led around the port top mark, but on Gravedigger the correct call was made to split right, as Prendergast explained: “It was like ‘we have to make something happen’. Our tactician wanted us to go right – so all the stars aligned. At one point on the run I wasn’t in a good position on the beam, in fact I was hanging on for dear life! I was surprised at the speed the boat was going at! But it was an exciting race, great fun.”

Gravedigger’s tactician Sam Gilmour, still nursing an injured foot from Tuesday’s capsize, added: “There was big bias the way we went and better pressure. So we passed Convexity downwind and just held on to the finish.”

Winner of today’s fifth race was a boat used to this position – 2019 M32 European Series champion Ian Williams’ GAC Extreme2, being skippered for this event by American Dan Cheresh with Williams tactician.

In this race GAC Extreme 2 scored an M32 ace. “It felt fantastic, huge for us,” said Cheresh. “We got off the line real nice and had a great reach. Once you get around the first turn in first place, it certainly makes it easier. We extended the whole time and it felt very, very good. We have a new team so the comms between Ian and myself and the trimmers and myself has taken a while to get this down.”

Williams agreed: “I said after race three that we were improving every race and we continued that in the last two races which was nice. It is coming together – the classic situation of ‘by the time we finish the regatta we’ll be ready to start it!’” For their efforts, GAC Extreme2 has displaced Convergence from the third step of the overall leaderboard, albeit trailing second-placed Bliksem by 24 points.

Tomorrow, the final day of the 2019 M32 World Championship will again be sailed in the Pelèr with a first warning signal at 09:00 when four races are scheduled to complete the series.