Last weekend’s M32 Pre-Worlds at Riva del Garda gave some indication of the form of the 12 catamaran teams going into tomorrow’s M32 World Championship, but was not the last word.

Certainly Convexity and Convegence, skippered respectively by Chicago-based brother and sister Don and Jennifer Wilson, are favourites, having finished second and first in the Pre-Worlds, 16 points clear of third. They are reaping the rewards of their two boat team, each having heavyweight crews, notably Match Racing World Champion Taylor Canfield on Convexity, alongside Ted Hackney, Kinley Fowler and Josh McCaffery, while Convergence has Antipodean match racing specialists Chris Steele, Will Tiller and Ricky McGarvie, plus Don’s 17-year-old daughter Ava.

Canfield, skipper of the new Stars & Stripes Team USA America’s Cup challenger, has sailed with and against Don Wilson a lot and this, their first M32 season together, has been successful: “They were pretty well sorted before I even got there. This winter went great and we won the Miami series. We won one of the Newport events and were close in the other.”

The two boat testing has paid through both teams having a regular training partner and pooling knowledge whether it is set-ups in different conditions or polishing manoeuvres. Mastering M32 reaching starts has also been vital. “We had two average races at the weekend, both because of average starts. If you are starting well and you are in that front group your options are open,” advises Convergence’s tactician Chris Steele.

Two secret weapons competing here are Convergence’s Will Tiller and Gravedigger’s Stu Dodson. Both were in Phil Robertson’s impeccable team that won back-to-back M32 World titles in 2017 and 2018.

Three more teams have come across from the US to compete on magnificent Lake Garda, also with strongly international crews. Bliksem, of New York-based Dutchman Pieter Taselaar – another favourite for the Worlds – has Australian match racer Keith Swinton as tactician alongside Australian Rhys Mara, Swede Julius Hallstrom and American Pauly Atkins. After a slow start, they finished the Pre-Worlds fifth.

No M32 World Championship would be compete without some entries from Sweden, home of the M32’s builder Aston Harald. New to the M32 European Series this season is Inga from Sweden of experienced keelboat campaigner Richard Göransson who is sailing with experienced crew Mark Bulkeley, Brad Farrand, Tom Powrie and boat captain Oliver Tizzard. 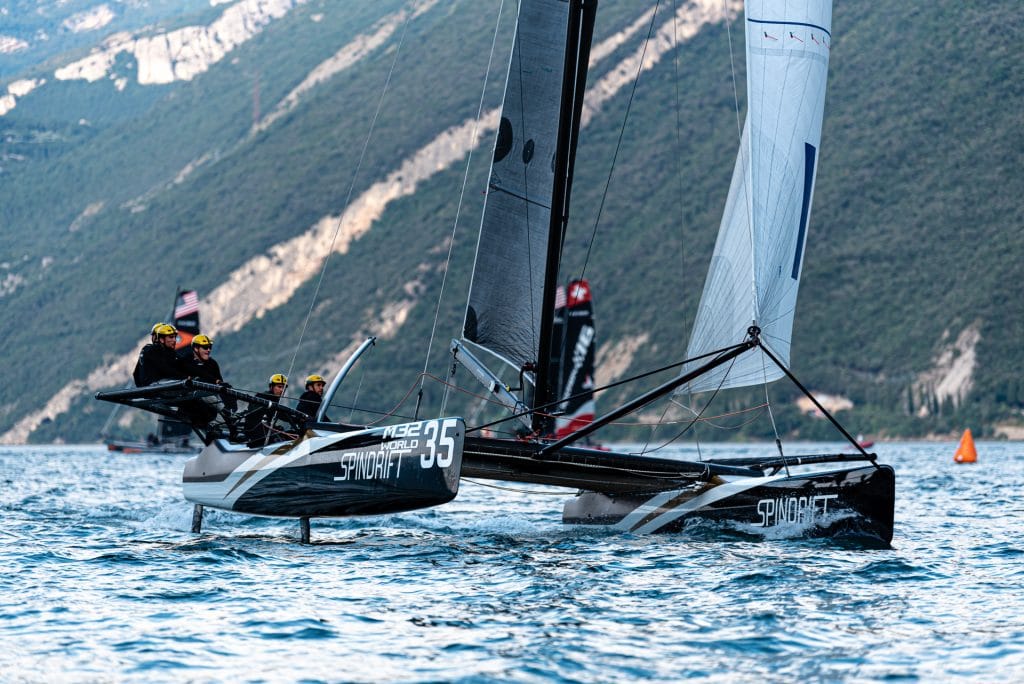 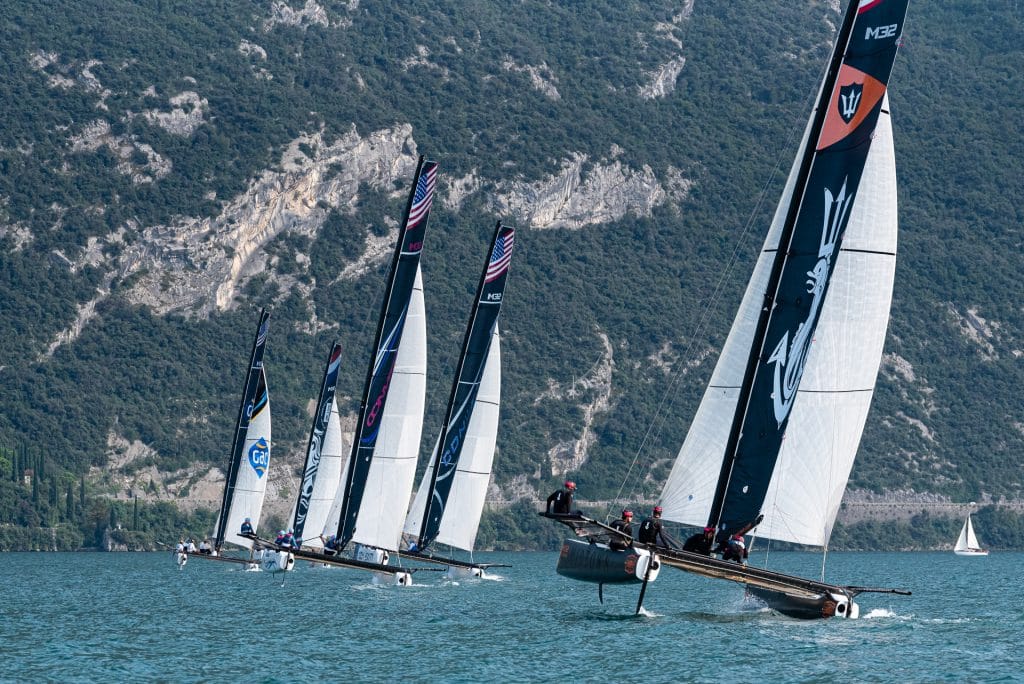 Also from Sweden is the M32 Worlds’ youth team – Karlsson Racing Team, skippered by 17-year-old Anton Karlsson. Karlsson competed at the M32 European Series Marstrand and his crew, who are otherwise all in their early 20s, comprises Pontus Karlsson and Filip Karlsson (unrelated to Anton) plus Pontus and Lukas Andersson, who are brothers.

Among the 12 teams, Karlsson Racing Team and Spindrift racing are the only ones where all the crew come from one country. On Spindrift racing, once again accomplished multihull sailor Xavier Revil is standing in for Yann Guichard on the helm, joined by regulars François Morvan and Matthieu Salomon but with two new faces in Bruno Mourniac and Corentin Horeau.

Of the other M32 European Series teams, Ian Williams’ team has been rechristened GAC Extreme2 for the M32 Worlds and has a mixed Anglo-US crew with Dan Cheresh helming, joined by Dave Shriner who sails on Cheresh’s Extreme2 M32 in the US. Williams moves on to tactics joined by team regulars Will Alloway and Richard Sydenham.

Switzerland is represented by Section 16 of Zurich-based Brit Richard Davies – the sole Swiss sailor competing being Chris Rast. They are joined by French catamaran veteran Herve Cunningham plus Russian Niko Kornev and Austrian 49er Olympian Nikolas Resch. Section 16 finished third at the Pre-Worlds, highest placed of the European teams and has been practicing hard on Lake Garda.

Having finally retired from his beloved Finn dinghy in which he represented the Netherlands at two Olympic Games, Pieter-Jan Postma is a long-standing M32 campaigner. He is joined by Aston Harald’s Jakob Wilson and match racer Pontus Dackhammar plus up and coming Dutch dinghy sailors Lars van Stekelenburg and Scipio Hautman. The new team had good opening day at the M32 Pre-Worlds finishing fourth.

The only team not to have competed at the M32 Pre-Worlds was that of Australian match racer Harry Price. He is joined by a young mix of Aussie and Kiwi match racers – Taylor Balogh, part of Nick Egnot-Johnson’s Knots Racing crew, plus Niall Marrow and Kiwis George Anyon and Conner Mashlan.

Racing at this third M32 Worlds, this year hosted by the Fraglia Vela Riva, starts tomorrow (Tuesday) with a first warning signal at 1400, and runs until Friday.