Miami Series Ends on High Note
In it’s 8th season the 2022 Miami Winter Series ended on a high note when the M32 fleet got together for the last event of the series.Team Convexity got away with the win of both the event and the series and showed that they can not only defend a lead but fight back from a tough position. 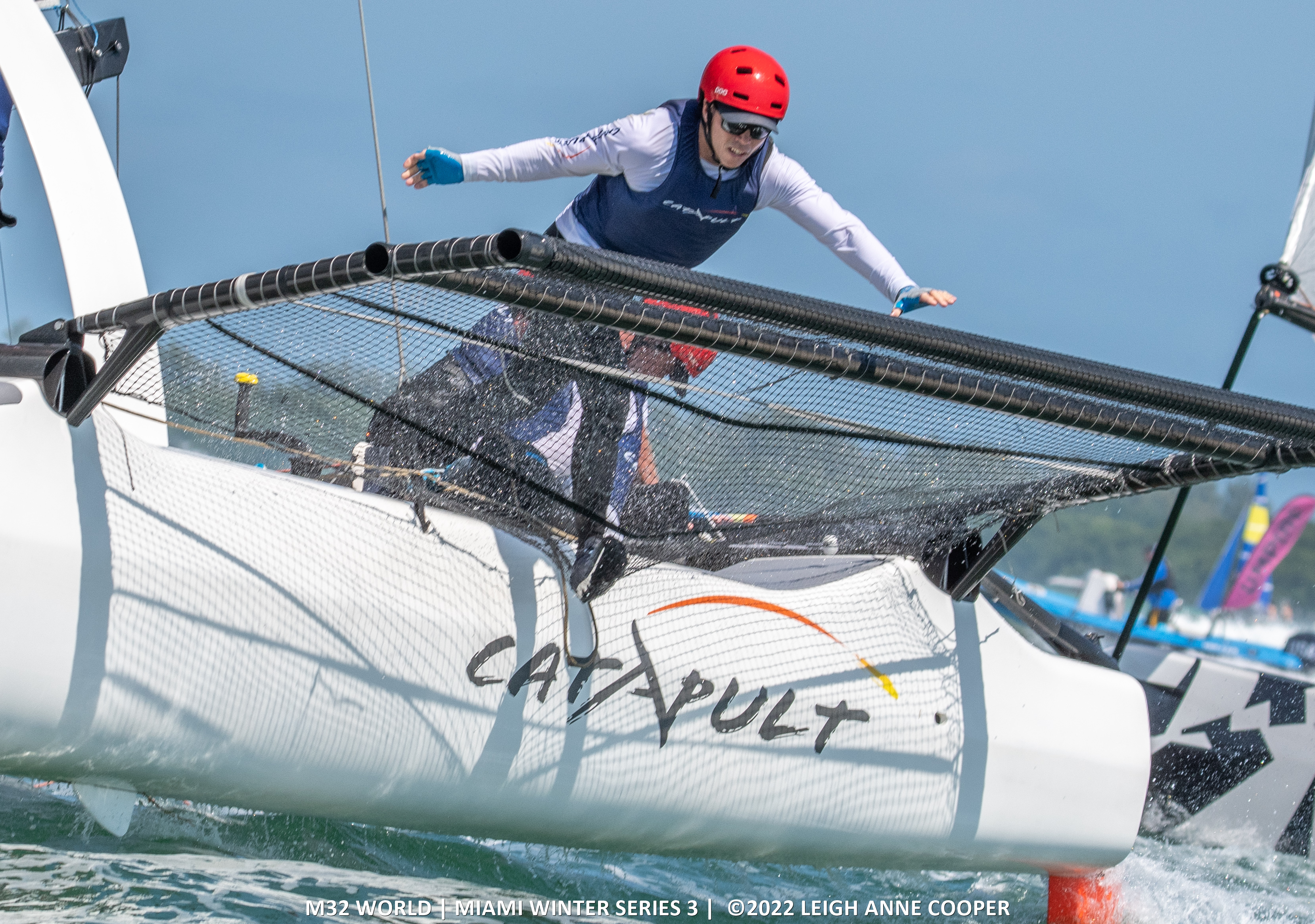 The Saturday racing started in typically brilliant Biscayne Bay conditions. Sunshine, flat water and 10-15 knots. Big smiles among sailors, photographers and race organisers and quite a few surprised looks when team Catapult won the first four races in grand style leaving reigning World Champions Convexity more than 10 points behind. Team Catapult with skipper Joel Ronning joined the circuit last year and have since then had mostly mid-fleet results. So what happened? What do they do now? The long term Catapult team member Patrick Wilson answers. “We arrived early and really tried to work on our starting and especially our trigger pull. That’s where we have been pretty weak in the past. We are pretty new and for us coming from slow monohulls the time on distance to the line is hard to calculate and hard to feel, so we really worked hard the three days before the event on just that really.” “When you get everything in flow it’s like having a hot head in poker or shooting dice really well you just need to get one going then they keep rolling and the next thing you have a lot of good races on the board, and then sometimes it goes the other way too..”

Clawing back to the lead 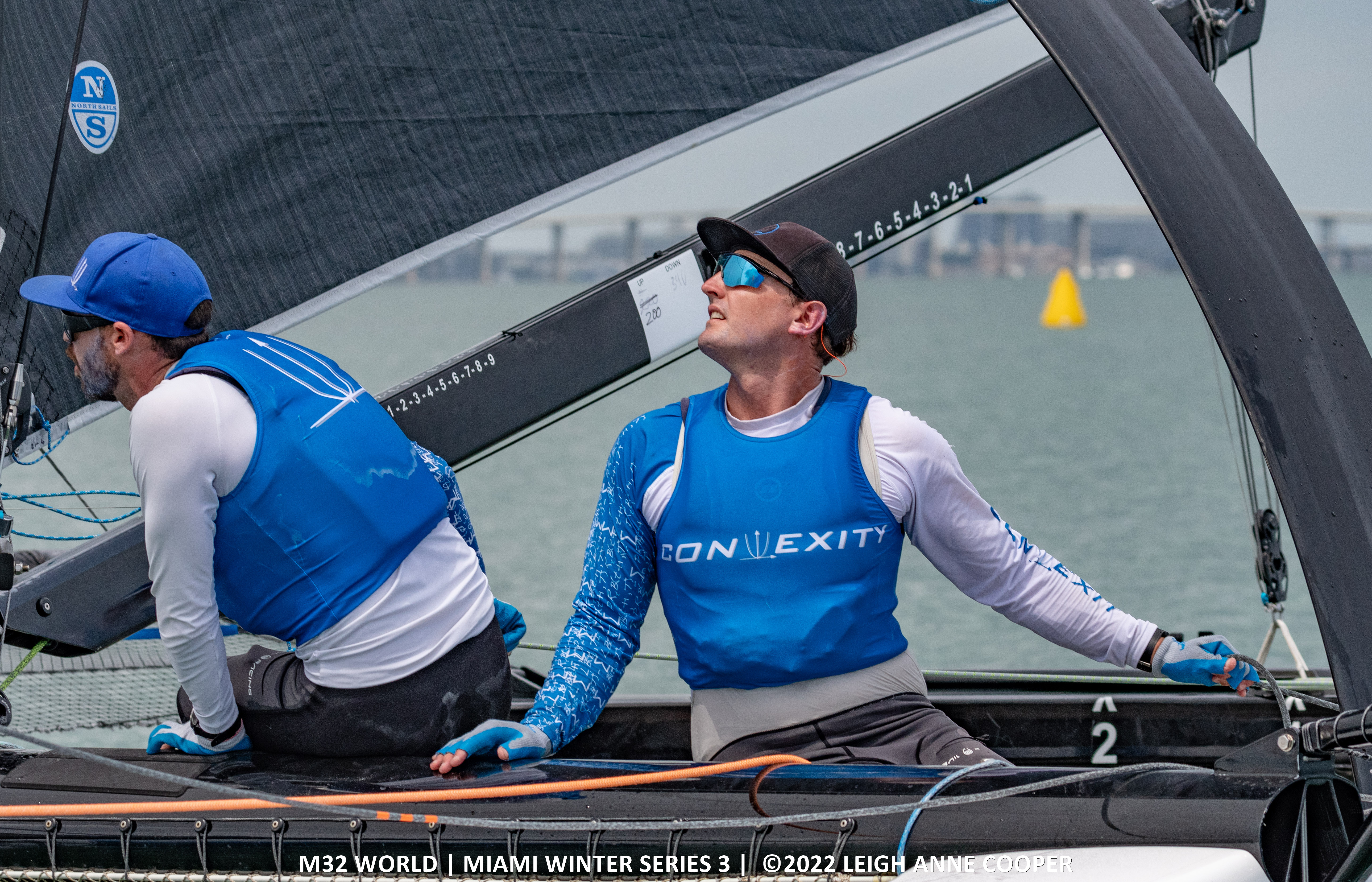 On day two team Extreme2 with skipper Dan Cheresh showed they are veterans of the class winning the day on points making it even harder for Convexity with skipper Don Wilson to fight back. Eventually they did, with a vengeance. Faced with some tough tactical choices the World Champions made it look easy winning the last two races walking away with the event and the Rooster Trophy making it the teams 4th win of the Miami Winter Series. Ted Hackney of Convexity says “I think the winter series has been a great step forward for the class, we started with 7-8 boats and now we are at 10 or 11 and the entire fleet is getting better and the level has stepped up since the World Championship which was just in November so that’s impressive in itself. I think the American fleet going over to Europe will be strong and we look forward to putting our best foot forward throughout the rest of the year and the World Championship.”
Full Results at m32world.com/results/ 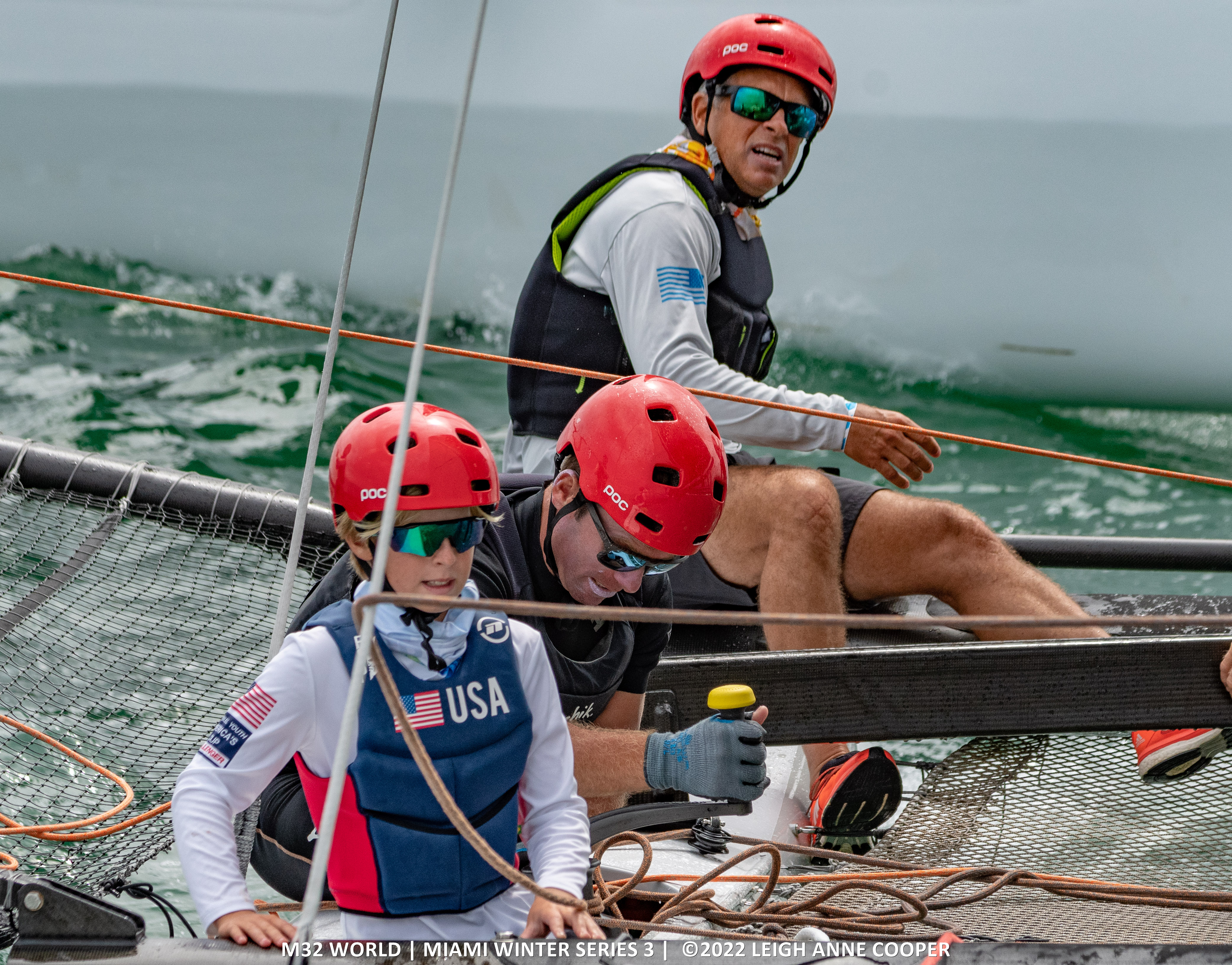 The 10 boat fleet was joined by fleet newcomers Bobby Julien on DingBat and Jay Cross on Flank Speed. The DingBat team had a healthy competition within the competition when Bobby’s sons, all accomplished junior sailors aged 11, 13 and 16 took over the helm for full races and held their own in the star specked fleet. Rumor has it Bobby just walked away with the family win but the battle will continue on future events.

After 58 races in the 5 events this winter the M32 class says goodbye to our Shake-A-Leg family for this time. We will be back next year. At the awards ceremony Shake-A-Leg hosted a presentation and CEO and founder Harry Horgan expressed gratitude to the 6-figure donations received from M32 class members and told the fleet of some of the improvements and changes to be implemented for next year. The M32 Class stands fully behind the Shake-A-Leg mission “To utilise the marine environment to improve the health, education, and independence of children and adults with physical, developmental and economic challenges, in an inclusive community setting.” 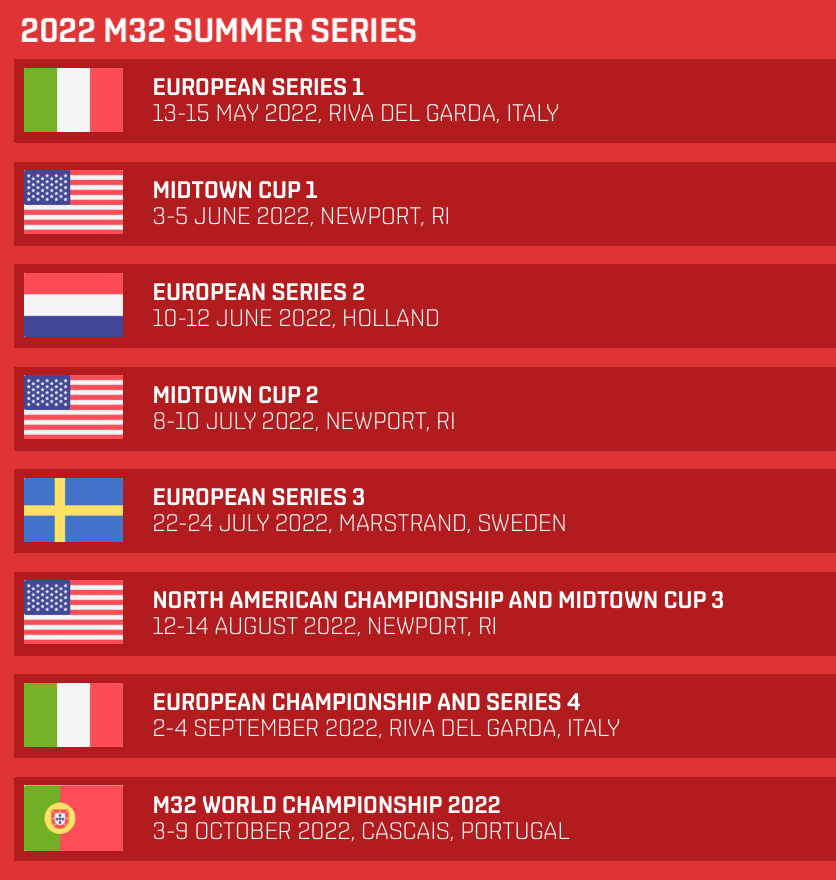 The American fleet is now relocating to Newport Rhode Island for the 3 event Midtown Cup ending  with the North American Championship. The racing starts in June and the class will, like last year, be hosted by the Midtown Racing Club, with its unique venue downtown Newport and crawling distance from Midtown Oyster Bar. The schedule is set so that the fleet will ship out to the Worlds in Portugal the week after the last event. The European fleet will start their racing on beautiful Lake Garda in May, make stops in Medemblik, Marstrand then back to Garda for the Europeans before joining the American fleet for the Worlds.
Full Schedule at m32world.com/calendar/

A picture is worth a thousand words
We all know how beautiful it is with a fleet of sailing boats racing on Biscayne Bay but it takes experts like Block Island Steve and Leigh Anne Cooper to capture it. A ton of great shots at:
Miami Winter Series Event 3 Album

The M32 Demo Boat
The majority of the M32 Fleet got their feet wet in the class via the M32 demo boat. Jakob Wilson heads the M32 Academy and demo boat program.  An accomplished high-performance sailor and competitor on the World Match Race circuit, he specialises in running the M32 Academy, a personalised clinic tailored to each team’s skill set. Jakobs has been with the M32 since the beginning and has been sailing with most of the sailors on today’s series. ”We have a well-developed program which transits keelboat sailors to multihull sailors. A small 4 person sports boat team, typically J-70 or Melges 24, shows up for a 2-3 days clinic. With the focus on the safety and the essentials of the M32 and multi-hull sailing, we can during a weekend get sailors, owners, and teams up to speed to compete on the M32 series” says Jakob. The M32 builder, Aston Harald, has committed to having a demo boat available on all events this year.
Demo Boat Info at m32world.com/demoboat