The North American M32 fleet took to Narragansett Bay this Friday ahead of the season’s fourth and final showdown. The crisp, fall New England weather will set the stage for an action-packed weekend, with winds up to 30 knots predicted.

At the top of the fleet, a battle for the season championship title wages on between Jason Carroll’s Argo, Ryan McKille’s Surge, and Larry Philip’s Midtown Racing. All three teams are separated by five points, as the leaderboard currently stands.

A new team joins the competition, skipper Steven Murray Jr. and tactician Mike Buckley have teamed up to take on the racecourse this weekend.

All fleet members should be in good spirits; it’s sure to be another exciting weekend at the Midtown High-Performance Racing Center. The event officially kicks off Friday evening with a Barbeque hosted by Larry Phillips and the Midtown crew.

Results will be updated at: 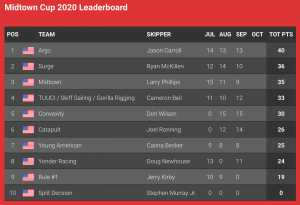