Newport Delivers – Next Marstrand
The sun came out for the weekend and gave the seven boat fleet the best Newport has to offer.  Five races sailed in 14-17 knots on Saturday and four races on Sunday with the fleet being treated to a nice sea breeze gusting up to 20 knots.

In challenging times for regatta organizers, we managed to put on a safe event. “We had great cooperation from the teams and the Midtown Racing Center and all others involved.  We exhibited that you can run a safe event in these complicated times,” says Dave Doucett of M32 North America, who has worked together with local sailing organisations and authorities to create an event that followed all Rhode Island health recommendations and guidelines.

Early on, team Midtown (skipper Larry Phillips) and team Argo (skipper Jason Carroll) were walking away with the most race wins and showed that they were the ones to fight for the regatta win. The way it should be, the last race was the decider. Midtown crossed the line ahead and got the first win in a three events series continuing in August and September. “We are just sailing well together; everyone knows where to be,” says Midtown Racing skipper Larry Phillips.
Link to dock talk with Larry Phillips, skipper of Midtown Racing

The battle was on for mid-fleet introducing new team Yonder Racing with skipper Doug Newhouse getting the bronze. Team Yonder Racing crew and reigning M32 World Champion Ted Hackney comments, “One of the best things about this class and this boat is that you can come in as a new team and be pretty much instantly competitive.”
Link to dock talk with Ted Hackney, crew of Yonder Racing 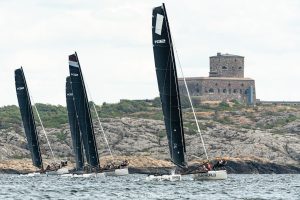 Next stop Marstrand
Next up is one of Europe’s top sailing venues, Marstrand, 7-9 August. This will be the first chance for the Scandinavian and European fleet to meet up for the season, and several teams have been seen training on their home waters. Hometeam Cape Crow Vikings comments on their team page, “Stoked to get back racing.”

“We are thrilled to get the European season going finally,” says class manager Mattias Dahlstrom and continues, “We are working closely with the National Federation to follow the regulations for events. Although we have a fairly digital set up, to begin with, there will still be some changes to allow for a responsible socialising.”

The season continues
The next event in Europe is the European Championship in another classic venue, Riva del Garda, in Italy 4-6 September. On the way south to Riva from Marstrand, several teams will get together for a training weekend in Aarhus, Denmark, home port of team Warrer Racing. In North America the Midtown Cup continues with events in August and September. The US Midwest fleet will race on Lake Michigan.
Full schedule m32world.com/calendar/

Distance racing the M32
The M32 has proven to be an exciting platform for coastal distance racing. In North America, 4 M32 teams faced off in the International yachting association club around the island race on July 11th.  The course is an 18-mile distance race around Conanicut island.  Team Argo who was competing in their MOD 70 took line honors with Yonder Racing only 16 seconds behind on  corrected time. 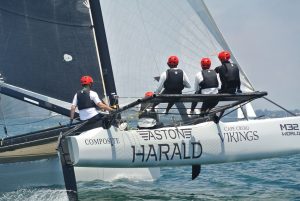 ”As a new M32 sailor, I was excited to participate in the race. So far, the boat is exhilarating and exciting to sail. I was a bit nervous at the beginning, given the boat’s speed and unique ability to “fly a hull.” However, now that I have some experience, I am looking forward to competing in the traditional short course M32 regatta,”  says Doug Newhouse of Yonder Racing.

””It was a pretty unique and fun situation in that the following weekend all teams then competed in M32s for some short course one-design racing,” said Dave Doucett of M32 North America.

In the works, Team Midtown and Rule #1 plan to take part in the 52 nm around Martha’s Vineyard Race on August 2nd.  “The target is the race record set by the maxi yacht Rambler, a 90’ water ballasted full-on Grand Prix racing program. “Our goal is 4 hours and 10 minutes to get around the island for the record. Rambler set the record, and it was a 20-25 knot ocean breeze day; hopefully, we get the conditions and the opportunity to show what the M32 can do,” says Sam Howell of Midtown Racing.

Rome Kirby, who helms the USA Sail GP program, will be part of team Midtown and will be racing against his dad Jerry Kirby driving Rule#1. Both have multiple Volvo Ocean Race and America’s Cup backgrounds, but when it comes to racing each other, that’s when it gets competitive.

In Europe M32 designer Göran Marstrom himself is preparing for the Around the Island of Tjorn Race, the premier distance race on the Swedish west coast. The record time for the 28nm race was set by another M32 helmed by Hakan Svensson at 2h 5min 24s in 2018 beating the 11 year old record set by 60ft trimaran HiQ.

Later this year several M32:s are expected at the classic races Centomiglia and Gorla on beautiful Lake Garda in Northern Italy. The M32 have a history of both speed records and line honors in these races.

This is the way most of our class members got introduced to the boat. The most common answer to the question,” Why did you start racing the M32?” has always been, “I tried it, and then I was hooked.” The demo boat will be available on most regattas to give you a chance to join the fun.
The M32 Demo Boat m32world.com/demoboat/
New and used M32:s for sale m32world.com/sales/