There can be only one: Fremantle World Match Racing Tour Debut 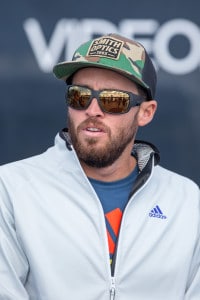 With a dominant performance in Miami during US-One’s foray into the M32 catamaran followed up by an even more dominant performance during the 2015 M32 Scandinavian Series, Taylor Canfield’s American/Virgin Islands/Kiwi/Aussie team is a nearly unanimous favorite to win the unprecedented million-dollar prize for the newly reformatted World Match Racing Tour finals in Marstrand this summer.  We caught up with the unflappable 26 year-old to learn more about his new crew, his new challenges, and the US-One team’s plan for this high-pressure 2016 season.

M32World: Despite a very talented 2016 field and Ian Williams’ having just taken out his sixth WMRT championship in just 8 years, you are a clear favorite for the coming season. How have you prepped for this game-changing season, and how do you feel about having such a giant target on your back?

Taylor: First off, well done to Ian Williams and his team for their achievement but from this point on, it’s a fresh start and a new game for all of us! While our extra time in the boats will likely help a bit early on the season, I can guarantee that any advantage we might have will diminish extremely quickly. We are currently just getting back in the boats this week in Bermuda after a long rest in the shed (since the end of M32 Series Scandinavia in September). I will say that it feels extremely nice to get back in the boat, but it’s also nice to have a strength and conditioning coach working with us to make sure that fitness will not get in the way of doing our jobs the best we can. We don’t see ourselves as being a target – we see our current status as our starting point; We will only allow ourselves to improve from this point on.

M32World: A severely shortened season with the biggest cash prize ever awarded in the sport of sailing – a cool million bucks – means a level of pressure you’ve never seen before.  Is there anything US-One team does to manage that pressure mentally?  And how about minimizing risk in a shortened season with everything on the line at the finale, where one equipment problem can mean the difference between being a millionaire and being in debt?

Taylor: I’m not gonna lie – it is definitely exciting to see some real money up for grabs in sailing! Hopefully, this brings the best of the best to the Tour, and the finals in Sweden should be insane! We look at the early events less as high-pressure racing, and more as training events leading up the finals, to make sure we are learning and evaluating our sailing all the way along. Luckily, the boats are provided, but unluckily, if there is a problem with one of the boats it is out of our control, just as it was in the old WMRT. Thankfully we have some incredibly supportive sponsors to make sure we have the time and resources to get to the finals at full strength – Smith Optics and Adidas Sailing have been great partners over the past couple of years.

M32World: Your rise to fame was anything but conventional.  Talk about what it means to go from the beachfront room above the humble yacht club in St. Thomas to being on the verge of making history in one of the most anticipated sailing events in recent memory.

Taylor: Beautiful weather year round and some of the best sailing conditions you can ask for almost every day of the year…it’s hard to beat that for an upbringing. Childhood in the islands may not be the easiest thing in the world, but as you said, I have been extremely fortunate to have made the rise through the ranks quickly and be challenging for a gamechanging championship and a huge cash prize at my age. But I could never have done it without total support from so many people: My family, my friends, my girlfriend, college coaches, countless supporters in St. Thomas and here in the states – in many ways they are all part of this campaign.

M32World: After a distinguished university sailing career, you took a different road from many of your peers.  Many went to work inside or outside the sailing industry, some threw their effort into Olympic class racing, but you went into match racing.  What pushed you down that road, and where does it eventually lead?

Taylor: A lot of my sailing as a teen and a college student was about having fun while engaging in my passion, and afterwards I wanted to find a way to continue to live a life doing what I love most. I learned very early on that the more days I spend on the water, the happier I am, and it doesn’t really matter what or where. I love exploring new places and new challenges of sailing new boats. That being said, in order to make this a sustainable lifestyle, I needed to find an affordable and fun way to continue to sail full-time, and match racing ticked all the boxes. Like almost any racer, I’ve always dreamed of competing in the America’s Cup – a match racing event – and working my way up to the World Match Racing Tour was always going to be one of the best paths to get there. Both the Cup and the Tour moving to multihulls didn’t change anything in my overall plan – it just made the sailing way more exciting and interesting

M32World: The WMRT is sailed in identical, series-provided boats.  What happens to the M32 cat that you own? How hard will it be for your team to get up to speed on a brand new boat?

Taylor: I know I have said it a lot, but moving to the M32 for the Tour is just massively exciting, and I hear all the time from fans and friends how stoked they are to see such a major change in the WMRT. With the America’s Cup and Grand Prix racing world rapidly moving on from heavy keelboats, the World Tour was losing its spark, and in one stroke, the new owner of the Tour has really fired up the sailors and the public with the move to these fast, charged-up multihulls. As for our approach to sailing in a brand new boat, we will continue to sail our US-One M32 cat in other M32 Series events, using the boat for training and drills to ensure we’re ready for each WMRT event. We will also work hard to set our existing boat up as similarly as possible to the way the WMRT boats are set up at the beginning of each event. We don’t know exactly where that is yet, but after the first event in Fremantle, we’ll know how to replicate those settings, recreating them on US-One to create the perfect platform for improvement.

M32World: One of your most loyal and experienced crew, Garth Ellingham, defected recently to your longtime rival on the World Tour, 6-time World Tour champ Ian Williams of GAC Pindar Racing. How has this impacted your team? What can you tell us about his replacement?

Taylor: We weren’t happy to lose Garth to the GAC team, but we wish him luck with Williams. At the end of the day, we all need to make our own career choices for our own reasons, and I don’t blame Garth at all. It opened up a slot that we quickly filled with Kiwi match racer Chris Main, who fits in extremely well with our team. He’s very strong, very quick, and has plenty of experience. While there’s some advantage for Ian in getting one of my guys, it’s a two-way street; Chris is a former teammate of Ian’s, so we’re kind of even.

M32World: You were recently named Virgin Islands Sailor of the Year and your girlfriend, Steph Roble, is the US Sailor of the Year.  Not only will she be competing against you on the Tour, but she’s on the first all-women team in the WMRT in a long time.  How will you handle competing against Steph at this level and with this much at stake?  Will it effect your relationship off the water?  How do you rate the Magenta Project’s chances for 2016?

Taylor: It’s awesome to see a female team competing on the Tour this year, and to have my girlfriend Stephanie be a part of it and be a part of history is even better! After sailing against the Magenta Project all last week in Bermuda, there is a lot of potential for these girls. With only about 2 weeks in the boat, they are already fighting hard and contending most of the time with more experienced teams. I can tell you that they are an incredibly talented group of girls and will work their a** off to get to the top!

As one of a small but growing group of female professional racers, Stephanie takes her sailing career at least as seriously as I do, and we both know what it takes to win. It will definitely be hard for us at times, but in the end, we are both there for the same reason and that’s to be the best sailors we can on the water, and the best teammates to our crews both on and off the water. I can guarantee you this: For both of us, the Team comes first. But as we found out sailing in Bermuda, there’s also some time to spend together once the business with the team is done for the day, and that’s a real treat. Having competed with and against each other many times before, we feel good about the balance we strike between our competitiveness, our careers, and our relationship.

M32World: You’ve now had some opportunity to learn how to match race these M32s.  What is the major difference in technique between old school match racing and the new version?

Taylor: Where did you hear that??? We’ve actually had almost no time racing one-on-one in the M32, and we really wish we had more time experimenting with it. To prepare, we’ve focused mostly on learning to sail the boats at maximum efficiency all the time. While the boats are quite simple, there are many small control adjustments that we believe will make a huge difference. This being said, we have spent a lot of time re-watching the video replays of the 2015 M32 Series Scandinavia, taking a lot of lessons from fleet racing situations that approximate match racing scenarios. We’ve started developing our own playbook for boat-on-boat situations, and it will become a valuable part of our preparation.