M32 fleet get together in Miami

The M32 is returning to Miami for the winter series in 2020 with a record fleet size. It will be sailing in a protected bay in warm winter temperatures and reliable winds. A city with easy logistics, housing, and plenty of opportunity for entertainment, Miami is a popular venue among the M32 teams. “We want to have good racing in good places, and Miami ticks all the boxes,” says Class President Pieter Taselaar.

More than 15 teams have signed up for the series this winter. The American fleet is growing steadily, and several teams are using the M32 Demo Boat to get into the class. Meanwhile, European teams will take advantage of Miami’s warm weather to keep their form during winter.
August Schram, sailing under the Austrian flag, is using the M32 Demo Boat to get into the class. “After 2 successful years in the Club Swan 50, we were looking for a boat to enjoy speed, fun on the water and high-class racing without loads of boat work and preparation.… that narrows it down to one boat – the M32.” The team, Stella Maris, may be doing their first M32 event, but with a crew combination of good M32 experience, they are a team to look out for.
“We are super excited to be here and it’s all really fun,” says Carina Becker of team Young American. This is the first M32 event for the team and they plan to stay in the class while aiming for the 2020 World Championship.

“We love coming to Miami. It’s normally sunny and warm, and it’s normally breezy,” says class veteran Richard Davies. His team, Section 16, was the top owner-driver team in Europe last season, and no doubt Miami is a good way to keep the form.

The team to beat is Convexity helmed by Don Wilson. Convexity is both the reigning World Champion and is holding the Rooster Trophy for winning last year’s Miami Winter Series. There is no lack of challengers and plenty of teams are aiming for the top spot. Pieter Taselaar’s Bliksem and Jennifer Wilson’s Convergence, both podium placed at the Worlds have shown before that Convexity is beatable in a regatta series.

The January event marks the start of the road to the 2020 World Championship. Globally there will be more than 15 events this year before the season ends, with the major event of the class, the World Championship in November, also in Miami. The racing this year will be in Miami, Newport, Chicago, and in classic sailing venues across Europe. 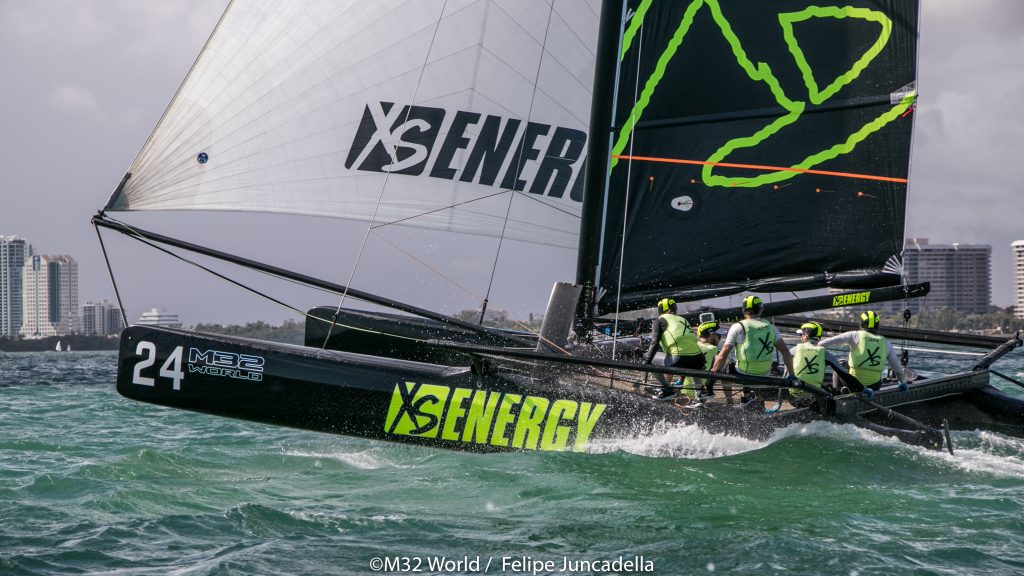 Joining the class is made easy with the M32 Demo Boat and the M32 Academy. “With the Demo Boat we can create a tailor-made introduction to the M32 based on the team’s previous experience,” says Jakob Wilson, M32 Product Manager at the builder Aston Harald Composite. With onboard coaching and training a few days before the event, a silting team will quickly get comfortable in the M32. The Demo boat will be available in the Miami events and in Sanremo, Italy from March and onwards.

“Miami makes it easy for the teams to go racing,” says M32 North America Director Dave Doucett. “We have good cooperation with both the city and the yacht clubs around the bay.” The boats are being assembled and launched by the ramp in Regatta Park. Coconut Grove Sailing Club helped with Race Committee volunteers, and thanks to Shake-A-Leg Sailing Center we have a base where all the boats can be moored at the same dock and where many of the after sail activities take place.