Newport (RI), USA (June 11, 2018) – The world-famous New York Yacht Club Around-the-Island Race, followed by two days of competitive fleet racing, made for an unforgettable NYYC Annual Regatta for the M32 fleet in North America and has left teams hungry at the prospect of the best summer of M32 sailing in the USA yet.

Around-the-Island Race
This three-day regatta on the US east coast begins with an Around-the-Island Race – a spectacle to behold as boats of all classes compete together in a hot lap of Jamestown Island. This race is always a firm favourite with M32 teams, often blasting along with the larger TP52 and Maxi 72 yachts.

As seems to be the case with almost every M32 race around the globe, the fleet was tight. After 18 miles of high-octane racing, it came down to just one boat-length to decide the winner. Craig Monk and Phil Roberson, skippering China One Ningbo at his first M32 regatta, took the win just ahead of Pieter Taselaar and his team, Bliksem. Just behind the lead two was Dan Cheresh with his Extreme 2, closing out the tightly packed podium in this individually scored race.

The New York Yacht Club’s social schedule was packed this past weekend, kicking proceedings off with a welcome cocktail party to compliment Around-the-Island Race’s prize giving. The highlight for the class however was the after party hosted by M32 skipper and local owner Larry Phillips at Midtown Oyster Bar. The party continued late into the night and was a perfect way to unwind after a long day of racing. 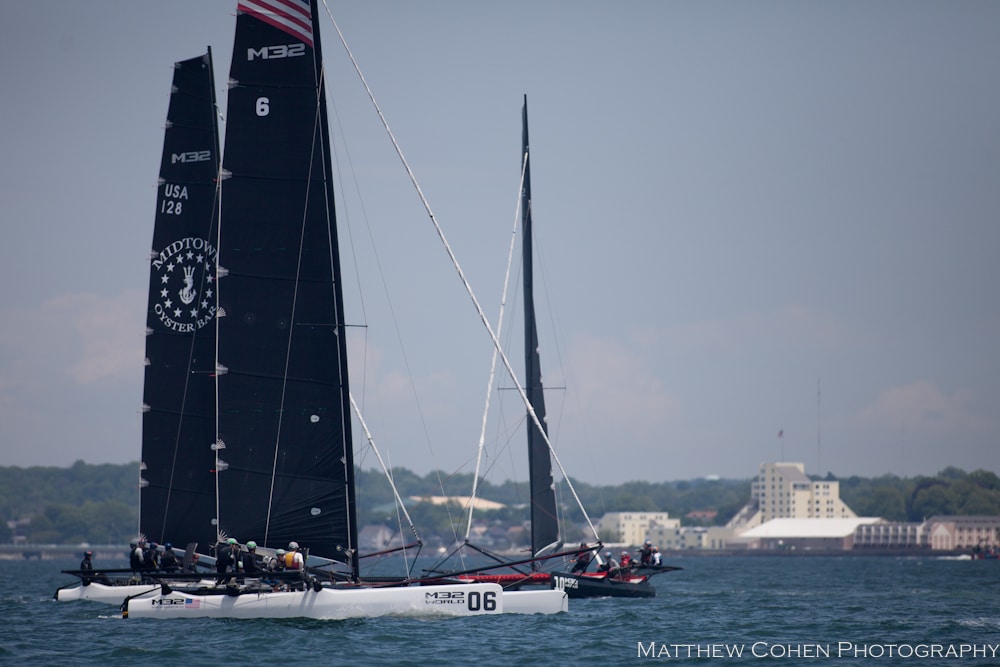 Super Saturday
After a caffeine fuelled skipper’s briefing, teams recovering from Midtown Oyster Bar’s shenanigans, it was off to the water for a jam-packed afternoon of competition, completing all six of the scheduled races for the day.

New boat owner Chris Poole wrapped up the day saying, “It was a good day for us. A couple of learning moments for some of the guys on the boat but Newport delivered pretty nice conditions with 5-10 knots of breeze. We got in 5 tight races with a nice coastal race back to the dock to end it. We are pretty happy with the way things are going, getting dialled in. Let’s see if we can’t move up to the podium tomorrow.”

In something resembling a sort of harmony, close-quarter M32 racing on the water was reflected in the skies as the Blue Angels F18 jets performed their aerobatic display over Newport.

All teams had mixed results, keeping the fleet tight with just three points splitting the podium places ahead of the final day of competition.

It All Came Down to the Final Race
With a much lighter breeze on Sunday, race officer Bill Canfield could only get two races away for the fleet. Chris Poole’s Riptide Racing took the first, building on what the team learnt over the first two days. This surprise result left Craig Monk and Dan Cheresh tied on equal points at the top of the leaderboard going into the final race.

Continuing his phenomenal performance at this regatta from the first two days, Craig Monk took his China One Ningbo team to victory and with it, claimed the event win. This was an exceptional debut performance skippering his team on the M32 Series, and he certainly had the right man by his side calling tactics in defending M32 World Champion Phil Robertson.

Chris Poole, at his first regatta as an M32 owner, echoed these thoughts commenting, “This is one of the best events to kick off the summer on the east coast. It is awesome to be here and to have six boats on the course.”

This usage of the boats gives M32 owners a unique opportunity to learn from some of the top sailors in the world right now, sitting side-by-side on the rack, all representing one team.

Next Stop
The M32 North America fleet remains in Newport for the Sail Newport regatta which takes place on Newport Harbor in just under a month, running July 6-8th.

For more information on the M32 Series in North America, see www.m32world.com/north-america-series

Please confirm deletion. There is no undo!
X
X