There can be only one:

There can be only one: Fremantle World Match Racing Tour Debut

After nearly two decades of setting the worldwide standard in monohull match racing, the World Match Racing Tour’s history-making change to M32 catamarans creates a wide open playing field for some of the world’s best sailboat racers. With a cool million dollars on the line at the Finals in Marstrand this July, these professional teams’ motivation to win has never been greater, but neither has the pressure. And whether their goal is to share in the largest prize purse in the history of the sport or to quickly stake their claim as the next America’s Cup crew, for many of these sailors, a great performance on the Tour could be a life-changing proposition.

Let’s have a look at the likely movers and shakers in the Fremantle fleet. 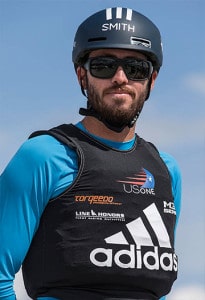 There isn’t a shred of doubt that US Virgin Islander Taylor Canfield and the mixed Aussie/Kiwi crew of US-One are serious favorites for both the Fremantle event and the 2016 overall Championship. Since their purchase of an M32 catamaran back in the winter of 2014, US-One has dominated almost every regatta they’ve entered. They attribute their early dominance to the lessons they learned during their extensive practices in Miami prior to the sweep of the 2014/15 M32 Miami Winter Series, but it was hard work, a strong work ethic, and the ability to adapt the team’s monohull match and fleet racing prowess that led to their easy victory against more experienced teams in the M32 Scandinavia Series last summer.

“We’ve put some real time and energy into improving our fitness for the 2016 season, as the M32 requires significantly more strength and endurance than the monohulls previously used in the Tour,” said Canfield, who in 2014 became one of the youngest skippers ever to win the World Match Racing Tour. Adding a professional strength and fitness coach to their tool kit adds perhaps the final answer to the million dollar trifecta: A team with the kind of fleet racing prowess they showed last year, skippered by one of the world’s most dangerous match racing skippers, with perfect fitness? We wouldn’t bet against them! 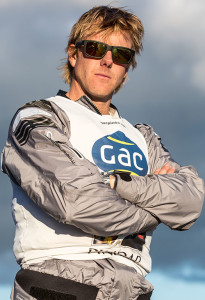 One man has proven to be kryptonite to Taylor Canfield’s ‘Super’ performance, and that’s Ian Williams, the winningest man in the history of the World Match Racing Tour. Only once in 5 tries was US-One able to unseat Williams’ GAC Pindar team for the overall World Championship; the British skipper owns 6 World Match Racing Tour season titles as well as a resume that includes a stint as an America’s Cup helmsman and numerous national and international wins.

Williams also boasts catamaran experience in the Extreme Sailing Series, though his debut in the M32 last year showed the GAC Pindar team has a steep learning curve in front of them if they want to challenge for the big money and prestige of the first-ever multihull World Match Racing Tour Championship.   Winter training paid off though, helping the team to a solid second place at the Bermuda M32 Series opener in January. One important move Williams made over the winter could allow the team to quickly move their performance to a new level; GAC Pindar poached trimmer Garth Ellingham away from US-One for the 2016 season. Always a master at head games, Canfield quickly snapped up Williams’ former world championship trimmer Chris Main for the season. Will Ellingham’s defection from the clear favorite allow Williams to challenge Canfield for supremacy? Or will US-One use the incident as motivation to beat Williams at all costs? In just a few days, we’ll find out. 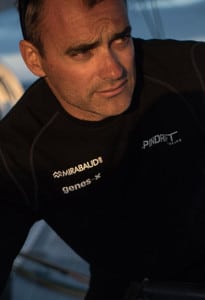 Unlike most of the 2016 field, the skipper of Spindrift Racing didn’t come to catamarans recently. After discovering the joy of multihull sailing on a beach cat at 20 years old, Yann Guichard spent the next two decades becoming one of the world’s most-respected multihull sailors; inshore and offshore; shorthanded and crewed.

Guichard’s CV reads like a who’s who in successful multihull racing teams; the former top-ranked Tornado sailor in the world competed in the Sydney Olympics and helmed Team Energy to good results in the America’s Cup World Series, he’s had victories skippering Extreme 40s for Alinghi and Groupe Edmond De Rothschild, he won the Bol D’Or aboard both the D35 catamaran Ladycat and the M2 catamaran Safram, and he’s broken multiple world records as part of the Orange 2 and Groupama trimaran teams. Guichard also proved his toughness on one of the world’s toughest ocean races – the doublehanded Transat Jacques Vabres – twice finishing 2nd in the dangerously overpowered ORMA 60 class aboard Gitana.

While Guichard’s speed and coolness under pressure are legendary, the 41-year old Brittany native has been plagued throughout his career by an inability to win ‘the big one’ on an international stage. He has, of course, won his fair share of inshore races as well as big offshore events: The Fastnet, MOD World Championship, Krys Ocean Race, and many more, but with all due respect, those fleets didn’t present the kind of competitive field we will see in Fremantle.

4th in the Olympics is a huge accomplishment, but there’s no medal. Guichard was twice runner-up in the Extreme Sailing Series, losing both titles on the final day of the season. Twice runner-up in the TJV, once the runner-up in the ORMA World Championship, and after a nailbiting round-the-world record attempt on the monstrous trimaran Spindrift 2, Guichard now owns the second-fastest time in history for a circumnavigation.

Is 2016 the year that Yann Guichard finds his way to the very top, or will the globe-girdling multihuller fall just short? 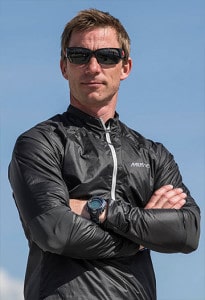 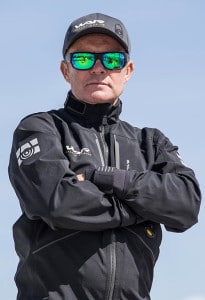 Created by one of Sweden’s most respected and beloved sailor/designers Göran Marström, the M32 catamaran is undeniably Swedish. With the million-dollar finale taking place just a few minutes outside Gothenburg this summer, the Swedes are ready to race, and they’re out in force. Both the 2013 and 2014 M32 Scandinavian Series winners will be on the line in Fremantle, and their rivalry goes back decades. Mattias Rahm (Rahm Racing) and Hans Wallén (WAR Racing) share similar resumés: They’ve both sailed ‘the big 4’: The Olympics, America’s Cup, Volvo Ocean Race, and World Match Racing Tour. But while both Wallen and Rahm showed plenty of speed and strong results during the 2015 Scandinavian Series, neither proved they could handle the starting prowess or overall boatspeed of US-One.

Experts call the new M32 platform and multihull World Match Racing Tour a ‘young man’s game,’ but extensive racing experience, lots of time in the M32, and the focusing power of a genuine rivalry could easily see either skipper on the podium. 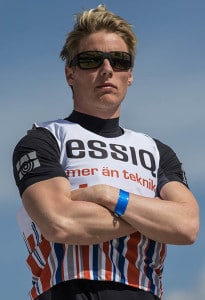 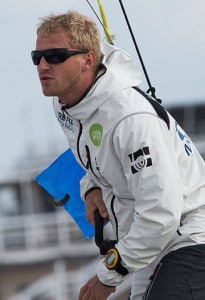 Two young Scandinavian standouts also make the form guide; as one of few skippers who showed he could successfully challenge US-One in both speed and maneuvers, 26-year old Nicklas Dackhammar (Essiq Racing) showed serious speed and aggression in the 2015 Scandinavian Series. For 2016, Dackhammar will need to reduce his mental errors on the course; a few major snafus on the course led to significantly worse results for the ’15 season than his speed indicated.

The other blonde and blue skipper is former Volvo Ocean Race competitor Nicolai Sehested, who was part of the Vestas Wind team that famously grounded on a reef in the middle of the Indian Ocean. The young Dane has gone back to his match racing roots for 2016 with the Trefor team, and he’ll be looking to send a message in Fremantle to set him up for a huge performance when the Tour heads to his home waters in May in Copenhagen. His team has the fitness and the aggression, but do they have time to learn the boats?

The Rest Of The Story

Our wild guesses above probably list the likely contenders for the big prize money, though a hugely varied group of skippers and crews will look to spoil the party for the ‘A-Listers’. Young, old, male, and female, they’re ready to prove they’ve got what it takes in the new world of M32 match racing.

From Australia comes one of the most successful high-performance skippers in the history of skiff sailing; Seve Jarvin has won an incredible 7 world titles in Sydney’s difficult 18-foot skiff fleet, and he’s barely 30 years old. Jarvin’s a young skiffy but compared to a few other antipodean skippers, he’s an old man. Matt Jerwood and Sam Gilmour are both barely out of their teens, but both have notches significant wins in both Youth and Open match racing in their native Australia. New Zealand’s Chris Steele is of a similar age, and all three will look to make their mark on the biggest stage of their careers.

It’s been just a few years since match racing staples Phil Robertson, Keith Swinton, and Eric Monnin have been the ‘young guns’, and all three now have plenty of experience after years of match racing all over the world. The three have a varied amount of multihull experience, with Robertson’s time in the Extreme 40 giving him perhaps a slight advantage over his well-known rivals. Monnin can rely on his prodigious brains; the Swiss match race specialist is also a PHD and engineer. 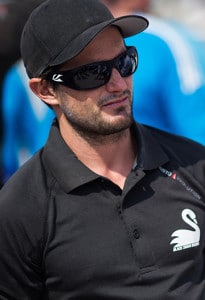 Western Australian skipper Keith Swinton may have the biggest advantage of any team here: Local knowledge. The Perth-born skipper’s Black Swan Racing Team is named for the nearby Swan River, and Swinton and his crews’ familiarity with the intricacies of ‘The Doctor’ may help him pump up his local fans with a strong performance on home turf . Despite his lack of time in the M32, Swinton has a real chance as a podium spoiler.

Wisconsin, USA’s Sally Barkow just missed out on an Olympic medal back in 2008, and since then the one-design specialist has racked up an impressive resume in match racing, fleet racing, and as one of the primary drivers aboard Team SCA in the 2015 Volvo Ocean Race. Barkow’s all-female Magenta Project includes some of her Volvo crewmates as well as inshore specialist and 2015 US Sailor of the Year Stephanie Roble, and they’re not on tour to show the world what women can do: They’re in Fremantle to prove they are a real contender against any team.

Follow all the drama with nearly constant video, photos, and written updates on the World Match Racing Tour Facebook Page.

The free, high-def, broadcast-quality live stream begins on 2 May. See you there!